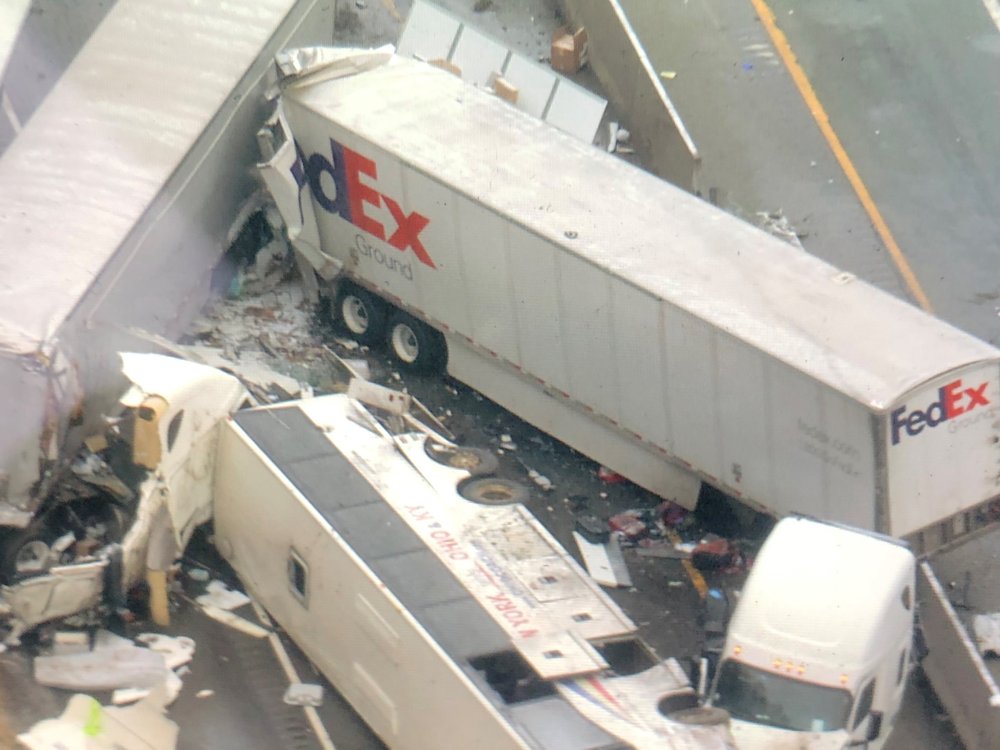 This image provided by KDKA TV shows the scene near Greensburg, Pa. along the Pennsylvania Turnpike where multiple people were killed and dozens were injured in a crash early Sunday, Jan. 5, 2020 that involved multiple vehicles, a transportation official said. (Photo: AP)

US federal investigators said Monday a packed bus passed a truck on the Pennsylvania Turnpike shortly before losing control and causing a chain-reaction wreck that killed five and injured dozens.

An initial report about the facts should be out in about 10 days, but it could be up to two years before the 3:30 a.m. Sunday crash is fully analysed, National Transportation Safety Board member Jennifer Homendy told reporters.

“I thought it was devastating,” Homendy said after reviewing evidence. “I imagine that if you were in this accident, that it was scary.”

She said the motor coach began its trip at 10 p.m. Saturday in Queens, New York, then stopped in Manhattan and Hackensack, New Jersey. She said driver Shuang Qing Feng, 58, was about 10 miles (16 kilometers) from being subbed out by the next driver when his bus passed a FedEx truck.

“Down the road” the driver lost control and the bus hit a concrete median barrier, went up an embankment and ended up blocking the westbound turnpike travel lanes, she said. The FedEx truck could not stop and hit the bus, after which a UPS truck also struck it.

Lamar Brady, of Columbus, Ohio, said he was awake in a window seat on the right side of the bus and saw the crash occur. Brady told Ohio reporters that it seemed to him the bus driver was traveling too fast as the bus moved to pass a slower-moving FedEx tractor-trailer and then lost control and struck the embankment.

“I keep seeing the accident unfold in my head,” Brady, 21, told The Columbus Dispatch as he rode another bus home.

Homendy said she does not know if the bus was speeding, but state police have recovered an engine control module that may provide details and investigators hope another vehicle’s outward-facing camera recorded relevant footage.

The road was resurfaced last year and was in good condition, she said.

The bus carrying 56 passengers was headed to Cincinnati and then Louisville before it would have returned to Queens, Homendy said.

The driver was thrown from the bus and died at the scene on Interstate 76 in a mountainous and rural area about 30 miles (50 kilometers) west of Pittsburgh.

The great majority of all vehicle crashes involve some sort of driver behavior, said Christopher Turner, director of crash and data programs for the Commercial Vehicle Safety Alliance.

“This is not a typical incident — buses overturning is not a common occurrence,” Turner said. “But obviously the risk is tremendous.”

State police said the motor coach was operated by Z&D Tour Inc. of Rockaway, New Jersey. Several calls seeking comment from the bus company and its owner were not returned.

But Z&D owner Chen Dan Yu told The New York Times that weather was to blame. “It suddenly started to snow,” he said.

Mount Pleasant Township Fire Chief Jerry Lucia, among the first to arrive at the scene, encountered dazed victims who had already been able to get out of the wreckage. The road was wet after being treated with road salt following about an inch of snow some four or five hours earlier, he said.

“My rescue engine was on the scene right before me,” Lucia said Monday. “When they got out of their vehicle they came upon 40-some people standing along the road with no shoes on, freezing cold.”

Lucia said he thinks many of the passengers had been asleep.

“They were all together,” Lucia said. “They were helping each other to keep calm and cool and collected.”

Many, if not most, did not speak English, he said. Rescue crews assembled them about 50 feet away from the crash, and medics began treating the wounded, getting the most seriously injured into ambulances. Because the crash had shut down the turnpike, emergency crews had to drive the wrong way down 5 miles of highway to reach the scene.

Turnpike officials shut down the highway and took out a section of guardrail so that westbound vehicles could be turned back east for eventual exit, Lucia said. Fire crews worked to contain spilled diesel fuel, he said. One firefighter injured an ankle while searching the wreckage for victims.

The injured flooded nearby hospitals with patients. Authorities have said all patients are expected to survive.

It was some 13 hours after the crash before the eastbound lanes could be reopened.

Feng and two other victims are from New York City: passengers Eileen Zelis Aria, 35, and 9-year-old Jaremy Vazquez, according to the Westmoreland County coroner’s office.