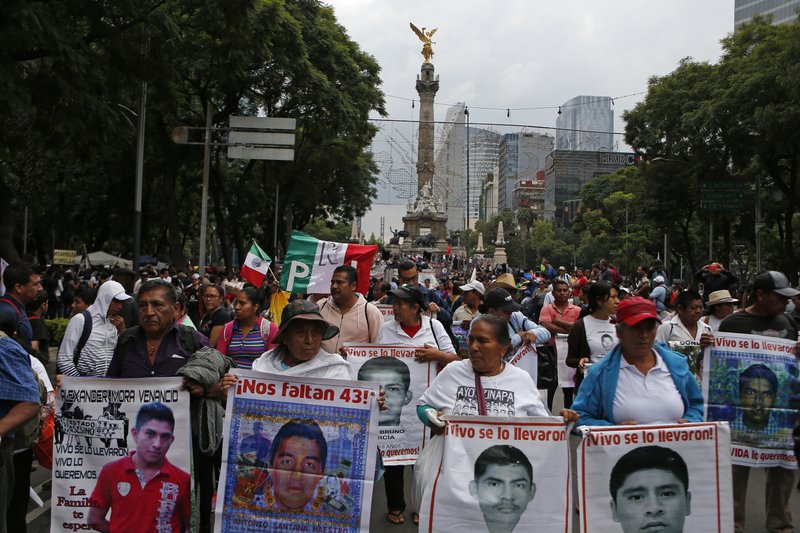 Parents of the 43 missing students march holding images of their sons during a protest march in Mexico City, Monday, Sept. 26, 2016. (File photo: AP)

A group of independent experts will be allowed to reopen its investigation into the murky disappearance of 43 students in southern Mexico in 2014, relatives of the missing men said Thursday.

The case of the "disappeared" students from the Ayotzinapa teachers' college still haunts Mexico, where the official probe was marred by irregularities and the former government refused to renew the mandate of the international experts in 2016.

The experts from the Inter-American Commission on Human Rights (IAHCR) will now be allowed to pick up where they left off, a lawyer for the relatives said after the families met with President Andres Manuel Lopez Obrador.

"In February or March we will have new developments in this investigation," the lawyer, Vidulfo Rosales, told journalists outside the presidential palace.

The 43 student activists had stolen several buses to take them to a protest in Mexico City when they were detained by police the night of September 26, 2014, and allegedly handed over to gang members who massacred them.

According to the prosecution's case, police officers who were on the payroll of the Guerreros Unidos drug cartel mistook the students for members of a rival group.

They allegedly handed them over to cartel hitmen, who slaughtered them and burned their bodies at a garbage dump.

However, the independent experts found that version of events was impossible, based on forensic analysis of the supposed crime scene.

After ex-president Enrique Pena Nieto's government declined to renew their mandate, the experts said their final hypothesis was that the students may have inadvertently taken a bus loaded with heroin bound for the United States.

Of the five buses the students took that night, it was the only one stopped by federal police, rather than shot up by municipal police, the experts concluded. All mention of the bus later disappeared mysteriously from the official case file.

Lopez Obrador took office in December 2018 with a promise to get to the bottom of the unsolved mystery, and created a truth commission for the case.

The attorney general has meanwhile vowed to reconstruct the investigation "almost from scratch."