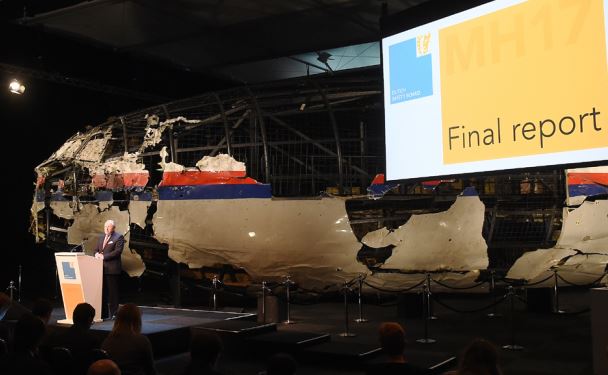 Dutch Safety Board Chairman Tjibbe Joustra speaks in front of the wrecked cockpit of the Malaysia Airlines flight MH17 exhibited during a presentation of the final report on the cause of the its crash at the Gilze Rijen airbase October 13, 2015. (Photo: AFP)

International investigators probing the downing of flight MH17 said Friday they will reveal fresh findings next week, nearly five years after the Malaysia Airlines plane was shot over Ukraine.

Relatives of the 298 people killed will be informed first next Wednesday, followed by a media briefing, the Dutch-led Joint Investigation Team said in a statement.

The Boeing 777 travelling between Amsterdam and Kuala Lumpur was hit by a Russian-made BUK missile on July 17, 2014 as it travelled over territory in eastern Ukraine held by pro-Russian separatists.

The Netherlands and Australia said in May 2018 that the missile was launched by a Russian military brigade. Russia vehemently denies involvement and instead blames Kiev.

The JIT said it would give a press conference next Wednesday "about developments in the criminal investigation into the bringing down of flight MH17", but did not give further details.

"This press meeting will be preceded by a closed meeting for the bereaved. The will be informed of the developments first," it said.

In March this year, Australia and the Netherlands held the first talks with Russia over the investigation

Close to two thirds of those killed on the flight between Amsterdam and Kuala Lumpur were Dutch, while 38 Australians were also lost.

The team has previously said it would "carefully" study counterclaims by Moscow about the disaster, adding that information previously provided by Russia such as the alleged presence of a Ukrainian fighter jet near the airliner on radar images was "incorrect".