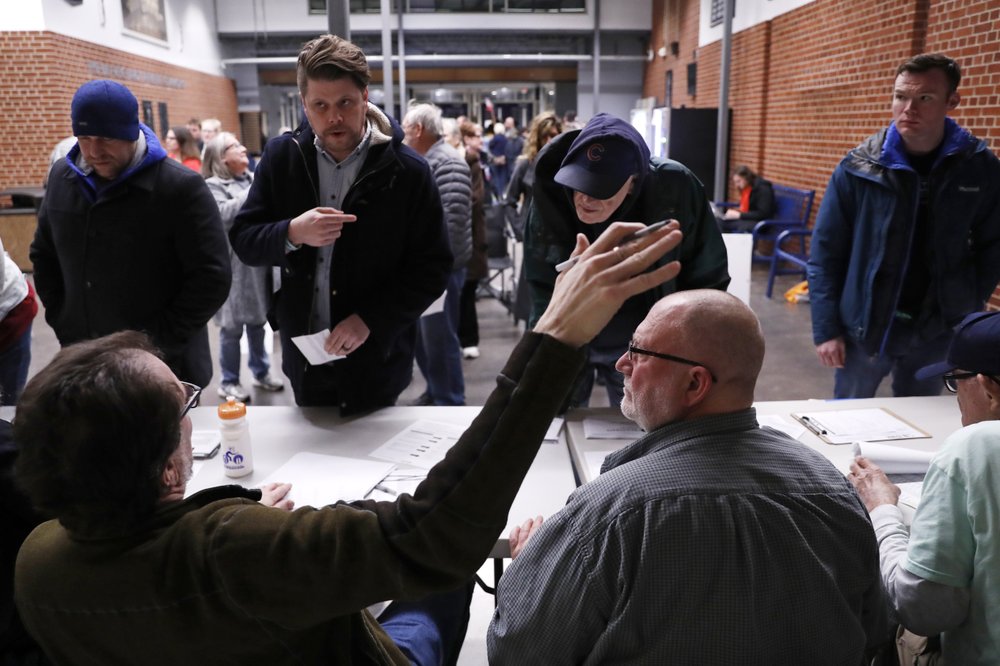 Americans on Monday kicked off the first vote of the 2020 presidential race as Iowa opened its caucuses, the closely-watched first step in deciding which Democrat faces incumbent Donald Trump in November.

The two frontrunners, far-left senator Bernie Sanders and moderate former vice president Joe Biden, face a key test in the sparsely populated state, with a handful of others looking to make their mark and earn momentum going forward.

As Iowa Democrats filed in to nearly 1,700 caucus sites -- schools, libraries, churches and meeting halls -- another hugely consequential political process was nearing its conclusion: the Senate impeachment trial of Trump, the man they hope to see off in the election exactly nine months away.

In a vote scheduled for Wednesday, Trump is almost certain to be acquitted by the Republican-led chamber on charges of abuse of power and obstruction of Congress.

The Iowa vote is a critical early look at the viability of the 11 Democratic candidates still in the race -- even though just 41 Iowa delegates are up for grabs, a fraction of the 1,991 needed to secure the party nomination in July.

Sanders and Biden lead in the state, followed by former South Bend, Indiana mayor Pete Buttigieg and Senator Elizabeth Warren. But polling has fluctuated and Iowa's quirky caucus system -- where voting is not by secret ballot but by public declaration for a candidate -- can make the night hard to predict.

Luke Elzinga, a volunteer for Sanders, appeared early at Lincoln High School in Des Moines which was converted into a caucus location.

"I think he really inspires a lot of young people, a lot of disaffected voters who might not otherwise turn out," Elzinga, 28, told AFP shortly before caucusing began.

"And so I think he's the best candidate to beat Trump."

Three candidates -- Sanders, fellow leftist Elizabeth Warren and moderate Amy Klobuchar -- have faced the unprecedented scenario of spending much of the past two weeks tethered to Washington for the impeachment trial instead of on the campaign trail.

Even as candidates sought to make 11th-hour impressions on undecided voters, the senators were obligated to return to Washington for the trial's closing arguments Monday.

Trump is all but certain to be confirmed as the Republican nominee, but his two sons and other surrogates were nevertheless in Iowa Monday making his case to Republicans who are also holding caucuses.

For Democrats, second-tier hopefuls Klobuchar and tech entrepreneur Andrew Yang look to outpace expectations and seize momentum heading into the next contest, in New Hampshire on February 11.

Earlier Monday Biden -- who still holds the lead in national polls -- brought pizza to a field office in a strip mall near Des Moines to thank volunteers.

Like many candidates, Biden spent the weekend crisscrossing Iowa in a final push to convince undecided voters he is best placed to accomplish Democrats' number one goal: defeating Trump.

The president has not stood idly by. On Sunday he branded Biden "Sleepy Joe" and described Sanders as "a communist," previewing a likely line of attack were Sanders to win the nomination.

Unlike secret ballot voting, caucus-goers publicly declare their presidential choice by standing together with other supporters of a candidate.

Candidates who reach 15 percent support earn delegates for the nomination race while supporters of candidates who fall short can shift to others.

Turnout is critical, and candidates and their representatives will seek to persuade voters on issues including health care, taxes and ending Washington corruption.

One key candidate who has opted not to contest Iowa is billionaire businessman Michael Bloomberg, who entered the race in November but has surged into fourth place in RealClearPolitics' national polling average.

The former New York mayor, who has spent more than $300 million on advertising, according to Advertising Analytics, is focused on running a national campaign with particular emphasis on states that vote on "Super Tuesday," March 3.