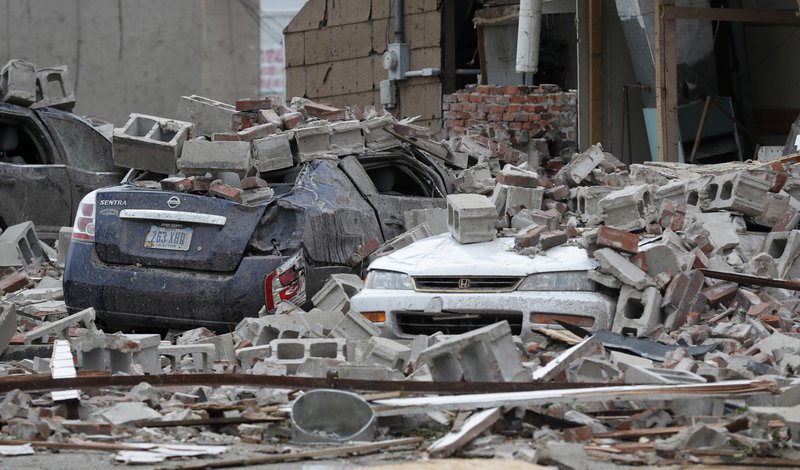 Thousands of people were without power Friday after a flurry of unexpected tornadoes swept through central Iowa, injuring at least 17 people and flattening buildings in three cities.

The storms even surprised weather forecasters when they hit the region Thursday afternoon, causing extensive damage to a manufacturing plant and prompting the evacuation of a hospital.

The National Weather Service said Friday that at least five tornadoes and likely more struck. Meteorologist Jeff Johnson said it will take days to determine their strength and total number.

The most extensive damage was in Marshalltown, a city of 27,000 people where 10 people were injured, brick walls collapsed into the streets, roofs were blown off buildings and the cupola of the historic courthouse tumbled to the ground.

Heavy equipment crews worked around the courthouse lawn Friday to remove entire trees blown over or shredded by the storm. The loud beep of backing trucks and grinding chain saws echoed several blocks away. Businesses and homes had gaping holes, some with roofs torn off or collapsed inward.

Thousands of people were without power Friday after a flurry of unexpected tornadoes swept through central Iowa, injuring at least 17 people and flattening buildings in three cities. (July 20)

Terri Shetler, owner of an embroidery shop, was digging out her 2017 Toyota Sienna. The vehicle’s windows were blown out and it was filled with mud, shingles and wood slivers. A front quarter panel was missing. She’d parked the car across the street from her shop, where she took shelter in the basement during the storm.

“I’m pretty shaken. I came out and saw the courthouse and all this,” she said. “But it can be replaced.”

With tears running down her face, Crystal Jensen explained how the storm blew away photos and a bracelet from her father who died two months ago. She ran to the basement when she saw debris coming toward the house. The storm blew over in just three minutes, she said.

“I just lost my dad two months ago and this happened,” she said through the tears. “I’m kind of at a loss.”

Alliant Energy spokesman Justin Foss said 500 utility poles needed to be replaced and 10 to 12 truckloads of poles were on their way. He said 200 crews have been called in to make repairs and restore power to 6,600 customers still without power. Natural gas service remains shut down in part of the city, he said.

In Marshalltown, the main hospital was damaged and all 40 patients at UnityPoint Health were being transferred to several other hospitals. Some buildings at the Iowa Veterans Home sustained roof damage, but no residents or staffers were injured at the facility that houses nearly 500 people, home officials said.

“It didn’t look like tornadic supercells were possible,” Krull said. “If anything, we were expecting we could get some large hail, if strong storms developed.”

Elsewhere, seven people were hurt when a tornado hit the agricultural machinery maker Vermeer Manufacturing in Pella, scattering huge sheets of metal through a parking lot and leaving one building with a gaping hole. People were still working at the plant at the time.

Seven people injured at the plant were taken to Pella Regional Health Center, hospital spokeswoman Billie Rhamy said. They all were released after being treated for their minor injuries, Rhamy said.

A tornado also destroyed several homes in the Des Moines suburb of Bondurant.