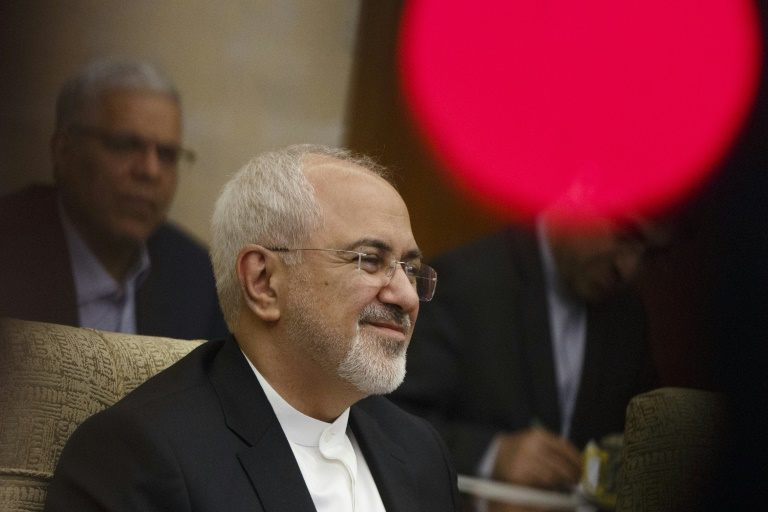 Zarif will later fly to Moscow and Brussels to consult the remaining signatories to the 2015 agreement (Photo: AFP)

Iran's foreign minister said Sunday he was hopeful of forging a "clear future design" for the nuclear deal facing collapse after Washington's withdrawal, at the start of a diplomatic tour aimed at rescuing the agreement.

"We hope that with this visit to China and other countries we will be able to construct a clear future design for the comprehensive agreement," Mohammad Javad Zarif told reporters after talks in Beijing with his Chinese counterpart Wang Yi.

Zarif will later fly to Moscow and Brussels to consult the remaining signatories to the 2015 agreement denounced by US President Donald Trump.

Washington's decision to withdraw from the deal and reimpose sanctions angered its European allies as well as China and Russia.

China was one of the six powers -- with the United States, Russia, France, the UK and Germany -- that signed the historic pact, which saw sanctions lifted in return for the commitment by Tehran not to acquire nuclear weapons.

As he arrived in Beijing, Zarif said Tehran was "ready for all option(s)", according to the semi-official ISNA news agency.

"If the nuclear deal is to continue, the interests of the people of Iran must be assured," he added.

After their meeting, Zarif and Wang hailed the "comprehensive strategic partnership" between their countries, with the Chinese minister saying: "I hope and believe that these visits to multiple countries will... help protect Iran's legitimate national interests and peace and stability in the region."

Tehran's chief diplomat embarked on the tour as regional tensions spiked just days after unprecedented Israeli strikes in Syria which a monitor said killed at least 11 Iranian fighters, triggering fears of a broader conflict between the two arch-enemies.

Before leaving, Zarif published a government statement on his Twitter page, slamming Trump's "extremist administration" for abandoning "an accord recognised as a victory of diplomacy by the international community".

It reiterated that Iran was preparing to resume "industrial scale" uranium enrichment "without any restrictions" unless Europe provided solid guarantees it could maintain trade ties despite renewed US sanctions.

Trump hit back Saturday evening, tweeting that the accord had failed to contain Iran's militarism.

"Iran's Military Budget is up more than 40 percent since the Obama negotiated Nuclear Deal was reached... just another indicator that it was all a big lie," he wrote.

Zarif's delicate diplomatic mission was complicated by the reports of clashes between Iranian and Israeli forces in Syria on Thursday.

The Syrian Observatory of Human Rights said Saturday that 11 Iranians were among the pro-regime fighters killed in strikes by Israel, which has vowed to prevent Iran from gaining a military foothold in neighbouring Syria.

Tehran, which has sought to avoid an escalation in a regional conflict that could alienate its European partners, has not commented on whether its forces were hit.

Israel and its allies have blamed Iran's Revolutionary Guards for initiating Thursday's exchange by launching missiles into the occupied Golan Heights.

Iran denies the claims, saying the Israeli strikes were launched on "invented pretexts".

Meanwhile, European diplomats in Tehran fumed that Trump's decision to withdraw from the deal could undermine years of patient work to restore commercial and diplomatic ties with the Islamic Republic.

"Since the signing of the JCPOA (nuclear deal), we have gone from an atmosphere like a gold rush, to one of utter depression," said a Western trade diplomat on condition of anonymity.

"We are waiting now for how the decision-makers in the European Union will react. If the EU leans towards accommodating the US, all the progress we have made since 2015 will be lost."

Iranian hardliners -- who have long opposed President Hassan Rouhani's moves to improve ties with the West -- are already mobilising against the efforts to save the nuclear deal.

Mohammad Ali Jafari, head of the Revolutionary Guards, said the country could not rely on the West.

"We hope recent events will lead us not to trust in the West and even Europeans," he said Sunday, according to the conservative-linked Fars news agency.

"The Europeans have repeated on several occasions that they will not be able to resist US sanctions."

He added if the European powers were unable to make guarantees, "we must choose the path of self-sufficiency and nuclear industry with our own capabilities".

The sentiment was echoed on the streets.

"Officials shouldn't trust France and Britain. They will never abandon the US for us," said housewife Poormoslem at a protest against Trump on Friday.

A photo on the official Instagram site of supreme leader Ayatollah Ali Khamenei showed him reading a Farsi translation of Michael Wolff's blistering account of the Trump White House, "Fire and Fury", quickly picking up more than 100,000 likes.

Khamenei said last week he was highly doubtful that Europe would provide the "real guarantees" needed for Iran to stay in the nuclear deal.

But analysts said Iran was determined to maintain the moral high ground in the coming weeks.

"For the first time, Iran has the chance to show the world they are not the rogue nation they are always presented as, that they negotiated in good faith and keep to their commitments," said Karim Emile Bitar of the Institute for International and Strategic Studies in Paris.