Iran, Iraq vow to bolster "brotherly" ties despite US pressure

TEHRAN, Nov. 17 (Xinhua) - Iran and Iraq on Saturday renewed their calls for close and "brotherly" ties despite fresh US sanction pressure.

"The Islamic republic's officials are very serious and determined on expanding ties with Iraq. I deeply believe in that too," Khamenei was quoted as saying by Tehran Times daily. 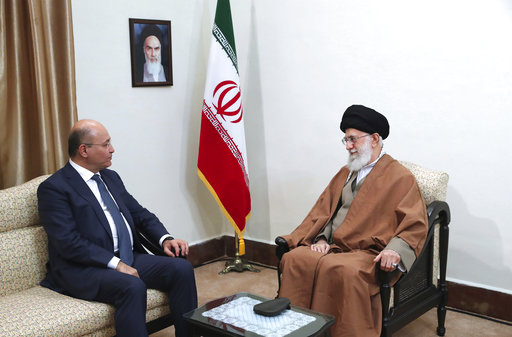 In this picture released by an official website of the office of the Iranian supreme leader, Supreme Leader Ayatollah Ali Khamenei listens to Iraqi President Barham Salih during their meeting in Tehran, Iran, Saturday, Nov. 17, 2018. (Photo: AP)

"A dear, powerful, independent, and developed Iraq would be very beneficial to Iran and we will stand by our Iraqi brothers," said the top Iranian leader.

Khamenei also urged unity among Iraqis as "a way for the country to triumph over enemies."

"The only way to fight (enemies') schemes is to preserve and boost unity among Iraqi groups, including Arabs, Kurds, Shiites, and Sunnis," he said.

For his part, Salih said that meeting with the leader of the Islamic republic was a "big pride" for him.

"I have come to Tehran with a clear and obvious message: that the factors and substances that bind the two nations of Iran and Iraq are rooted in history and are unchangeable," said Salih.

He said that the the Iraqi government hopes to tap cooperation capacities with Iran to help the reconstruction of Iraq.

Also on Saturday, Iranian President Hassan Rouhani said that his country would try to raise the level of annual trade between the two neighbors despite the amounting pressure of the United States against the Islamic republic.

"The trade between the two countries hits about 12 billion US dollars (per year) and, through bilateral efforts, we can raise this figure to 20 billion dollars," Rouhani said during talks with Salih.

Besides, Salih said that Iraq is determined to expand comprehensive ties with Iran in his term, according to Iran's Press TV.

Baghdad attaches great significance to the expansion of its relations with Tehran, he said, adding that much work still needs to be done to elevate the current level of bilateral relations to a new height.

"Different plots by the United States and some reactionary countries in the region to harm cordial relations between the two nations will lead nowhere," Shamkhani was quoted as saying by state TV.

In response, the Iraqi president said his country was sensitive about measures against regional security and stability.

Iraq would firmly counter any move which would harm unity between the two countries, Salih added.