Iran navy ship sinks after fire in Gulf of Oman 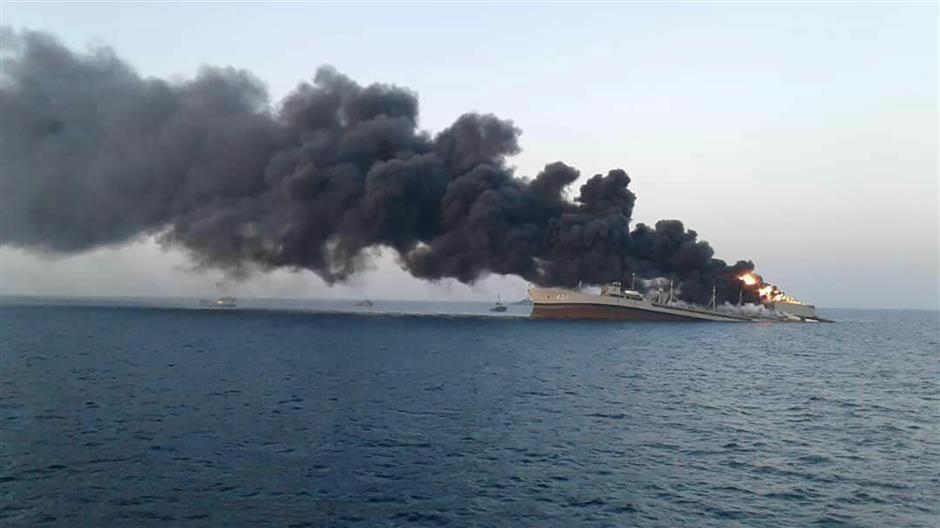 Smoke rises from Iranian navy's largest ship in Jask port in the Gulf of Oman on Wednesday.

One of Iran's largest naval ships sank on Wednesday after catching fire off a strategic port near the head of the Gulf, the navy said.

The British-built fleet replenishment vessel Kharg, which measured more than 200 meters long, caught fire on Tuesday off the port of Jask on the Gulf of Oman, the navy said.

Footage aired by state television showed a massive column of smoke rising from what it said was the burning vessel.

The fire broke out in "one of the systems" of the ship, a navy statement said without elaborating.

Firefighting efforts continued "for 20 hours" before the ship went down. The ship's crew all safely disembarked.

"Considering the spread of the fire, the mission to save the Kharg failed and it sank in waters off Jask," the navy said.

The Kharg served as one of the few vessels in the Iranian navy capable of providing replenishment at sea for its other ships. It also can lift heavy cargo and serve as a launch point for helicopters. The warship, built in Britain and launched in 1977, entered the Iranian navy in 1984 after lengthy negotiations that followed Iran's 1979 Islamic Revolution.

The navy said the vessel was on a "training mission" in international waters.

Iran's ISNA news agency said its mission had focused on "training, intelligence and combat" alongside the destroyer Alborz. The port city of Jask, near which the Kharg went down, lies close to the Strait of Hormuz, the strategic chokepoint at the head of the Gulf through which a fifth of world oil output passes.

In April, an Iranian ship called the MV Saviz believed to be a Guard base and anchored for years in the Red Sea off Yemen was targeted in an attack suspected to have been carried out by Israel.

In 2020, during an military training exercise, a missile mistakenly struck a naval vessel, killing 19 sailors and wounding 15. In 2018, a destroyer sank in the Caspian Sea.