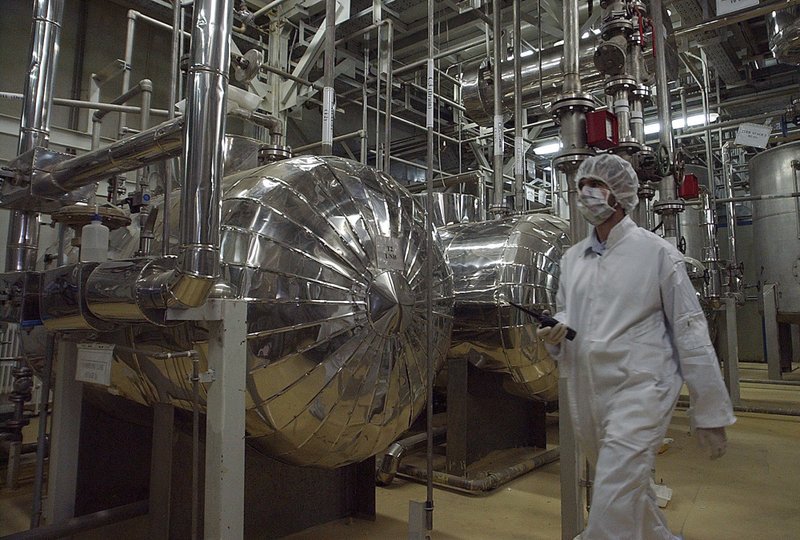 FILE - In this March 30, 2005 file photo, an Iranian security official in protective clothing walks through part of the Uranium Conversion Facility just outside the Iranian city of Isfahan. (Photo: AP)

Zarif explained this was Iran’s first major step outside of the agreement since the US pulled out last year.

Neither the IAEA nor Zarif have specified the reserve levels. Last week, an Iranian official said they were at 2.8 kg above the 300 maximum.

Zarif also said the European signatories of the JCPOA (Joint Comprehensive Plan of Action) had taken "insufficient" measures to ensure Iran's benefit from the accord after the US exit.

The foreign minister later insisted in a tweet that Tehran had not violated the nuclear agreement.

The announcement comes amid mounting tension with the US, raising fears of a conflagration war in the Gulf region. The news also comes less than two weeks after US President Donald Trump said he ordered air strikes on Iran but canceled them at the last minute.

European powers still remain connected to the nuclear agreement and have tried to keep it in place following the US exit.

Last week, Germany, France, and the UK announced a payment channel with Iran called INSTEX, and was established to help continue trade and circumvent US sanctions. But it could have far-reaching diplomatic consequences at a time when European countries are trying prevent US-Iran confrontation.

According to French media, the Iranian announcement "puts Europe under pressure to do more to moderate the effects of overwhelming US sanctions.”

British newspaper The Guardian reported that "Tehran is convinced that with real political will, Europe could do more to increase trade with Iran, which has collapsed in a year."

The latest US sanctions “have discouraged almost all major European companies, including banks, from trading with Iran," the report also said.

European nations, including France, urged Iran not to make the "mistake" of violating the agreement. For its part, Tehran has said they have remained "in the context" of the pact, citing two articles allowing a party to temporarily ease commitments if it believes another party is not holding up their end of the deal.

British Foreign Minister Jeremy Hunt said on Monday that the Iranian announcement was "deeply disturbing" and urged Tehran to "stay in the deal.”

"We want to preserve that deal because we don’t want Iran to have nuclear weapons but if Iran breaks that deal then we are out of it as well," Hunt said.

In the short term, the violation is more like "a call for help from Iran to its partners to get out of the difficulties in which US sanctions place its economy a real danger of nuclear proliferation," said former French Ambassador to Iran François Nicoullaud.

According to Nicoullaud, this would not preserve the plan, nor secure economic benefits for Iranians.

“It should be resolved using the deal’s mechanism,” Nicoullaud added.