Iran was poised Thursday to begin work on advanced centrifuges that will enrich uranium faster as the 2015 nuclear deal unravels further and a last-minute French proposal offering a $15-billion line of credit to compensate Iran for not being able to sell its crude oil abroad because of U.S. sanctions looked increasingly unlikely. 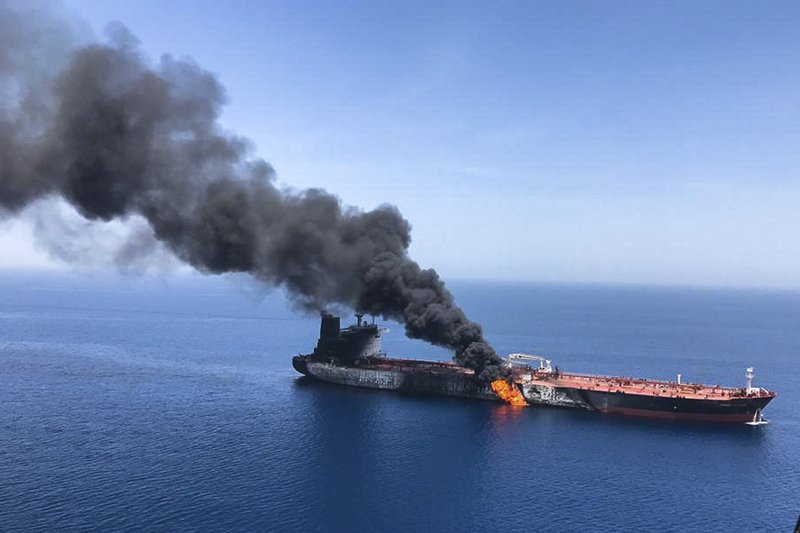 In this June 13, 2019 file photo, an oil tanker is on fire in the Gulf of Oman. The U.S. Navy is trying to put together a new coalition of nations to counter what it sees as a renewed maritime threat from Iran. Meanwhile, Iran finds itself backed into a corner and ready for a possible conflict. It stands poised on Friday, Sept. 6, 2019, to further break the terms of its 2015 nuclear deal with world powers. (File photo: AP)

Meanwhile, Iran released seven crew members from a detained British-flagged oil tanker Stena Impero in a goodwill gesture and the mariners flew out of Iran, the ship's owner said.

Though Iran has yet to say officially what exact steps it will take as a deadline it gave Europeans to salvage the deal is to expire on Friday. Centrifuges that speed enrichment further shorten the time Tehran would need to have enough material available to build a nuclear weapon — if it chose to do so. Under the deal, experts thought Iran would need about a year to reach that point.

The U.S. meanwhile continued its effort to choke off Iran's crude oil sales abroad, a crucial source of government revenue. Iranian Foreign Minister Mohammad Javad Zarif, who continues a whirlwind global diplomatic tour, insists his country will do everything it can to keep those sales going, though he described U.S. sanctions in an angry tweet Thursday as the equivalent of a "jail warden."

"We will sell our oil, one way or the other," Zarif told Russian broadcaster RT in a recently aired interview. "The United States will not be able to prevent that."

Tensions between Iran and the U.S. have been growing since President Donald Trump unilaterally withdrew America from the nuclear deal, which saw Tehran agree to limit its uranium enrichment in exchange for the lifting of economic sanctions. In the time since, Trump re-imposed old sanctions and created new ones, going as far as targeting Iranian officials like Zarif and Iran's paramilitary Revolutionary Guard.

Meanwhile, mysterious oil tanker attacks struck near the Strait of Hormuz in recent weeks, attacks that the U.S. blames on Iran. Tehran denies it was involved. Iran also shot down a U.S. military surveillance drone and seized oil tankers as America deployed nuclear-capable B-52 bombers, advanced fighter jets and more troops to the region.

The U.S. has sought to seize an Iranian oil tanker, the Adrian Darya-1, now thought by analysts to be off the Syrian coast despite a pledge by Tehran that its cargo wasn't bound there.

Iran has begun break limits of the deal, such as just creeping beyond its 3.67%-enrichment limit and its stockpile rules. Using advanced centrifuges speed enrichment and Iranian officials already have raised the idea of enriching to 20%, which is a short technical step from weapons-grade levels of 90%.

Iran long has maintained its nuclear program is for peaceful purposes and denies it seeks an atomic bomb. However, Western nations have pointed to previous Iranian research into a weapons program that U.N. experts say largely ended in 2003.

France in recent days had pushed the idea of offering Iran a $15 billion credit to sell its oil, though details remain unclear and it appeared the deal wouldn't come through before Iran's deadline Friday.

That appears to show Iran trying to resort to its own maximum pressure campaign through the nuclear program to get what it wants, said Henry Rome, an analyst for the Eurasia Group.

"Iran's plan appears to be provocative but reversible," Rome said. "Tehran is building leverage, not a bomb."

Israeli Prime Minister Benjamin Netanyahu, a longtime hawk on Iran, called on the world to increase its pressure on Tehran before flying to London for meetings with British officials on Thursday.

While Trump maintains he's open for North Korea-style talks with Iran, his administration has continually upped its pressure on the Islamic Republic. On Wednesday, the U.S. imposed new sanctions on an oil shipping network it alleged had ties to the Guard and offered up to $15 million for anyone with information that disrupts the Guard's operations.

"There will be more sanctions coming," Brian Hook, the U.S. special envoy for Iran, told reporters at the State Department. "We can't make it any more clear that we are committed to this campaign of maximum pressure."

Hook also directly emailed or texted captains of Iranian oil tankers, trying to scare them into not delivering their cargo, according to the Financial Times.

Zarif reacted angrily to the report.

"Having failed at piracy, the US resorts to outright blackmail_deliver us Iran's oil and receive several million dollars or be sanctioned yourself," the diplomat wrote on Twitter.

Meanwhile, seven of the 23 sailors aboard the Stena Impero flew out of Iran after being released, Stena Bulk CEO Erik Hanell said in a statement.

The crew members "are now travelling to a safe location where they will be reunited with their families," Hanell said. "They will receive medical checks and a debriefing before being repatriated to their home countries at the earliest opportunity."

There was no immediate comment from Iranian officials, nor any acknowledgement in state-run media.

Iran seized the tanker on July, saying it violated Iranian laws, after authorities in the British territory of Gibraltar seized the Adrian Darya said to be to be carrying fuel to Syria in violation of EU sanctions on oil sales to the government in Damascus. The Iranian vessel, now called the Adrian Darya-1 was released in August.

The remaining 16 crew members are to stay onboard the Stena Impero.