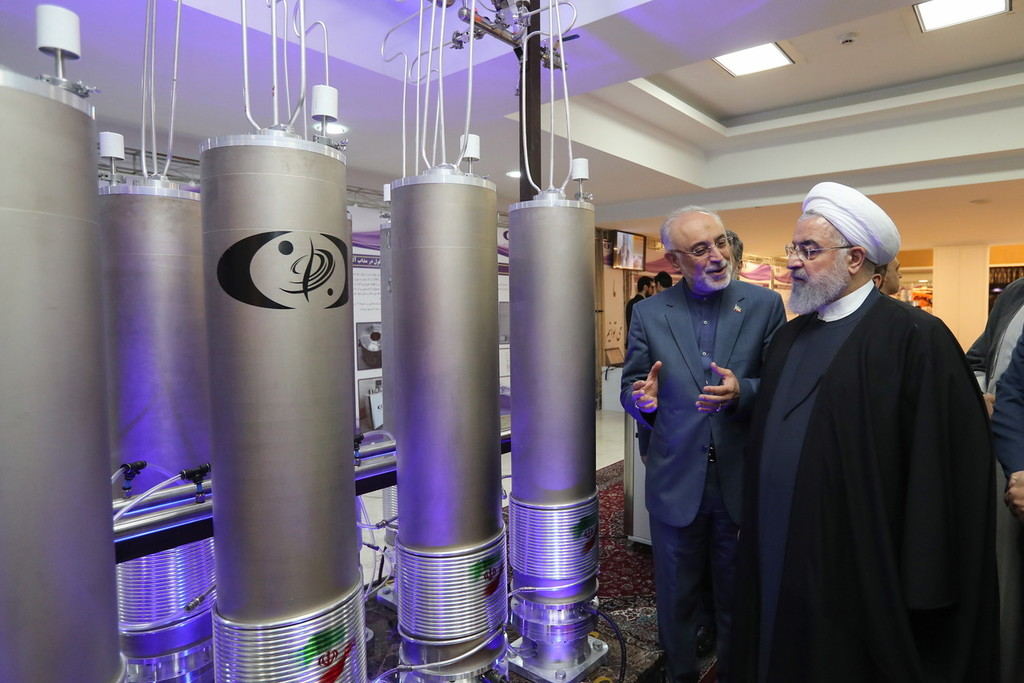 Iran announced on Monday that it has exceeded a limit on its stockpile of low-enriched uranium set under a 2015 nuclear deal, a move seen by analysts that will escalate tensions in the current row of conflicts between Teheran and Washington.

Iranian Foreign Minister Javad Zarif said on Monday that Teheran had passed the 300-kilogram limit of low-enriched uranium stockpile set by the 2015 Iran nuclear deal, but also left room for the remaining parties to the agreement to try to salvage it, noting that the move announced on Monday was "reversible", according to local media reports.

Following Zarif's remarks, White House Press Secretary Stephanie Grisham said in a statement that the United States will "never allow" Iran to develop nuclear weapons, calling it "a mistake under the Iran nuclear deal to allow Iran to enrich uranium at any level".

"We must restore the longstanding nonproliferation standard of no enrichment for Iran, and maximum pressure on the Iranian regime will continue until its leaders alter their course of action," the statement added.

Foreign Ministry spokesman Geng Shuang told a daily news conference that the Iran nuclear tension is rooted in the extreme pressure imposed by the US.

Participants involved in the Joint Comprehensive Plan of Action, or JCPOA, have made unremitting efforts to safeguard the deal, he said, adding that Iran has repeatedly stressed its willingness to stay in the agreement, and that the measures it has taken are reversible.

"We call on all relevant parties to bear in mind the general and long-term picture and jointly safeguard the JCPOA," he added.

JCPOA is a landmark nuclear deal reached by Iran, the European Union, the US, China, Russia, France, Germany and the United Kingdom in 2015. The US withdrew from the agreement last year and reimposed sanctions on Iran, including threat to cut Iran's oil exports to zero.

On May 8, the one-year anniversary of the US withdrew from the deal, Teheran announced it would no longer respect the limit set on its enriched uranium and heavy water stockpiles.

Iranian President Hassan Rouhani set a 60-day deadline to get relief from punishing sanctions, promising to resume enriching uranium to a higher level than now allowed under the treaty if his demand goes unmet.

Washington has blamed Iran for a series of attacks on tanker ships and Teheran shot down a US surveillance drone last month. Analysts said the developments have raised fears of an unintended slide toward conflict that both sides have said they want to avoid.

According to Wang Jin, a Middle East researcher at Northwest University in China, Teheran's announcement shows its latest response to Washington's withdrawal from the nuclear accord and its reimposition of sanctions. The sanctions have weakened Iran's economy and choked its ability to sell oil.

"However, exceeding the limit of low-enriched uranium is not in itself a signal that Iran intends to abandon its pledge of peaceful nuclear development," Wang said, adding that Teheran's move is a strategic one to have more parties, especially Washington, to return to the negotiation table.

Qian Xuming, an associate research fellow at the Middle East Studies Institute of Shanghai International Studies University, also said Iran's move may "irritate" the US but an armed confrontation is "unlikely".

"The only way to solve the issue is through dialogue. The premise is that the both sides can return to the negotiation table and resolve disputes and differences through multilateral consultations rather than unilateral sanctions," Qian added.

Meanwhile, UN Secretary-General Antonio Guterres is also concerned by the reports that Iran exceeded limits on its low-grade enriched uranium stockpile, his spokesperson said on Monday.

"The secretary-general is very much aware of the reports that Iran may have surpassed its JCPOA limits on its low-enriched uranium stockpile," said Stephane Dujarric, spokesman for Guterres.

Dujarric said, if verified, such action by Iran "would not help preserve the plan (JCPOA) nor secure the tangible economic benefits for the Iranian people. It's essential that this issue, like other issues related to the implementation of the plan, be addressed through the mechanism established by the JCPOA."

Pan Mengqi and Zhou Jin in Beijing, AFP and Reuters contributed to this story.