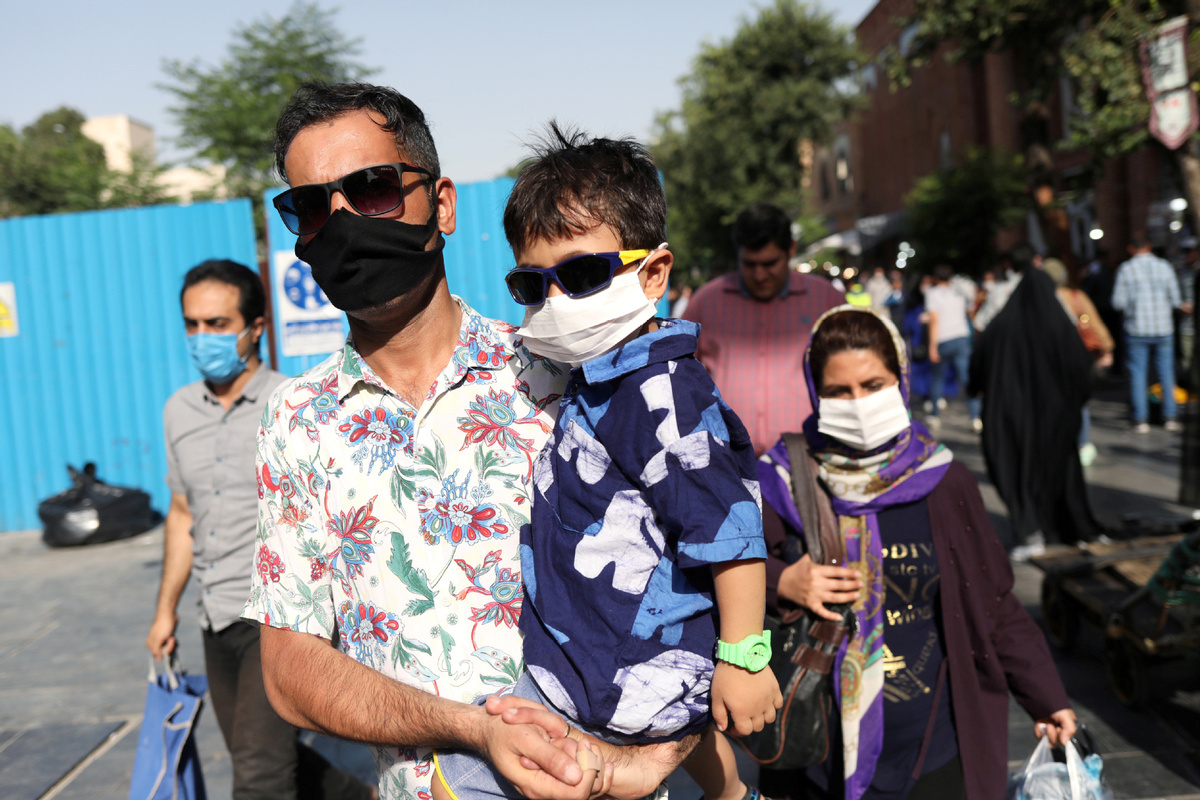 An Iranian man and his son wearing a protective face mask walks in a street, following the outbreak of the coronavirus disease (COVID-19), in Tehran, Iran, June 28, 2020. [Photo/Agencies]

CAIRO, Sept. 1 (Xinhua) -- Iran reported 1,682 more COVID-19 cases on Tuesday, raising the tally of infections in the country to 376,894. Meanwhile, Saudi Arabia reported 898 new cases, the lowest record in daily infections in the kingdom since April.

Sima Sadat Lari, spokeswoman for Iran's Ministry of Health and Medical Education, said the pandemic has so far claimed 21,672 lives in Iran, the hardest-hit country in the Middle East, up by 101 in the past 24 hours.

She added that 325,124 people have recovered and been discharged from hospitals while 3,709 remain in critical condition.

Saudi Arabia reported 898 new COVID-19 cases and 32 more deaths on Tuesday, taking the total infections to 316,670 and the death toll to 3,929. This was the lowest daily spike in infections in the kingdom since mid-April, and the third day in a row when the daily infections fall below 1,000.

The total number of recoveries in Saudi Arabia rose to 291,514 after 718 more patients recovered from the disease.

Hazim al-Jumaili, Iraqi deputy health minister, said that the health authorities are mulling new proposals to reduce the financial difficulties because many commercial activities such as restaurants and shops are suffering from the impact of the restrictions.

The total number of recoveries in Israel rose to 96,214 after 1,205 new recoveries were confirmed on the day, Israeli Health Ministry said.

The tally of recoveries rose to 245,929 after 1,003 more patients recovered in the last 24 hours, Health Minister Fahrettin Koca tweeted.

In an interview with the Turkish daily Hurriyet, Koca said that Turkey is currently experiencing the second peak of the first wave of the COVID-19 outbreak that started in March.

He blamed the resurgence in infections on the activities during the Eid al-Adha holiday in early August and the weddings held in the country.

Kuwait reported 702 new COVID-19 cases and three more deaths, pushing the tally of infections to 85,811 and the death toll to 534, Kuwaiti Health Ministry said in a statement.

The ministry also announced the recovery of 433 more patients, raising the total recoveries in the country to 77,657.

At the same time, 560 more patients recovered from the virus, taking the tally of recoveries in the UAE to 61,491, said the UAE Ministry of Health and Prevention, adding that the death toll remained unchanged at 384.

Palestine on Tuesday confirmed 552 new COVID-19 cases, raising the tally of infections in the Palestinian territories to 30,490, including 180 deaths and 20,792 recoveries.

French President Emmanuel Macron visited the Rafic Hariri University Hospital to follow up on Lebanon's fight against COVID-19 and the relevant materials needed by the country.

The tally of recoveries increased by 228 to 115,895, while only one death was reported, raising the total fatalities to 198, the ministry said.

Libya on Tuesday announced 658 new coronavirus cases, the highest daily spike so far, which brought the tally of infections to 14,624, including 242 fatalities and 1,676 recoveries.