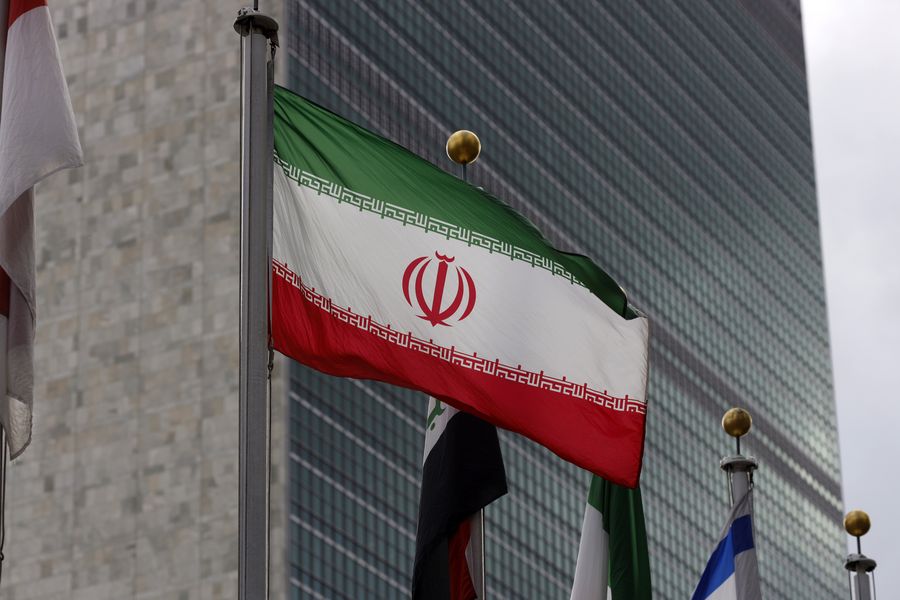 An Iranian flag is pictured at the United Nations headquarters in New York, Jan. 8, 2020.(Xinhua/Li Muzi)

"Despite internal consultations at the beginning of its tenure on how to continue Vienna talks, the Iranian government has made clear that it will welcome negotiations that have tangible results and serve the rights and interests of the people," Amir Abdollahian said during a telephone conversation with his British counterpart Dominic Raab, as reported by official news agency IRNA.

The Iranian government expects "all illegal sanctions" against Iran to be canceled, he said.

Concerning the situation in Afghanistan, the head of Iran's diplomacy regretted the effects of "wrong policies of the United States and some Western countries" on that country.

Amir Abdollahian pointed to the formation of a government that includes all Afghan ethnic groups, the inclination towards dialogue and not violence, consideration for the people, and an effective fight against terrorism as the means to achieve security and stability in Afghanistan.

The Iranian foreign minister said Iran has been host to millions of Afghan refugees over the past four decades, and stressed the need for sustained joint international responsibility in the face of new waves of asylum seekers, and also to counter drug trafficking.

According to the official Iranian readout of the conversation, the British foreign secretary, for his part, greeted Amir Abdollahian over his appointment and expressed hope that under the new Iranian administration, relations between the United Kingdom and Iran would develop on the basis of mutual understanding.

Raab took to Twitter later in the afternoon, and wrote he had called on Iran "to release all arbitrarily detained British nationals" and to return to the Vienna talks to revive the 2015 nuclear agreement.

The two sides agreed to continue their talks on the sidelines of the UN General Assembly meeting later this month in New York, IRNA reported.

Former U.S. President Donald Trump withdrew from the 2015 agreement in May 2018 and unilaterally re-imposed sanctions on Iran. In response, Iran has gradually ceased to perform parts of its commitments under the deal since May 2019, invoking provisions within the text of the accord.

After six rounds of talks in Vienna since April, the parties said serious differences remain between Iran and the United States for the revitalization of the agreement. The sixth round of talks ended on June 20, two days after Iran's June 18 presidential election.