Iran's president wants removal of US sanctions before holding talks 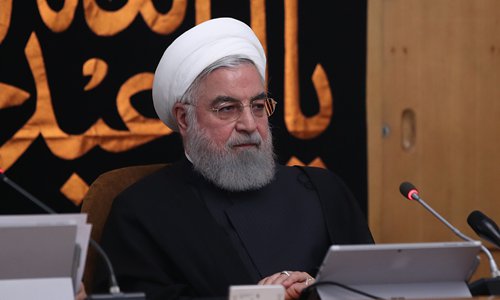 Iranian President Hassan Rouhani has urged the United States to lift its sanctions against Iran before holding any possible talks, Press TV reported on Thursday.

Speaking to his French counterpart Emmanuel Macron on Wednesday, Rouhani said there was no point in holding talks with the US as long as it keeps sanctions against the Islamic republic, the report said.

Rouhani accused the US of violating its commitments under the 2015 nuclear deal by deciding to quit it in May 2018.

"From the viewpoint of Iran's government, parliament and people, as long as there are sanctions in place, there is no point in negotiating with the United States," the Iranian leader said.

Rouhani told Macron that Iran was ready to resume implementing the deal at its fullest once its agreements with Britain, France and Germany, which are signatories to the nuclear deal, to implement the deal were fulfilled.

Macron, for his part, said Paris would continue its efforts to implement the deal, while laying out his country's future plans for the negotiations.

The three European countries have been trying to save the Iranian nuclear deal by holding talks with Iran on finding a way to avert the US sanctions on Iran since the US pullout from the deal last year.

Iranian officials have repeatedly said that the US should return to the nuclear deal and implement its obligations if it wants to hold talks with Iran over their differences.