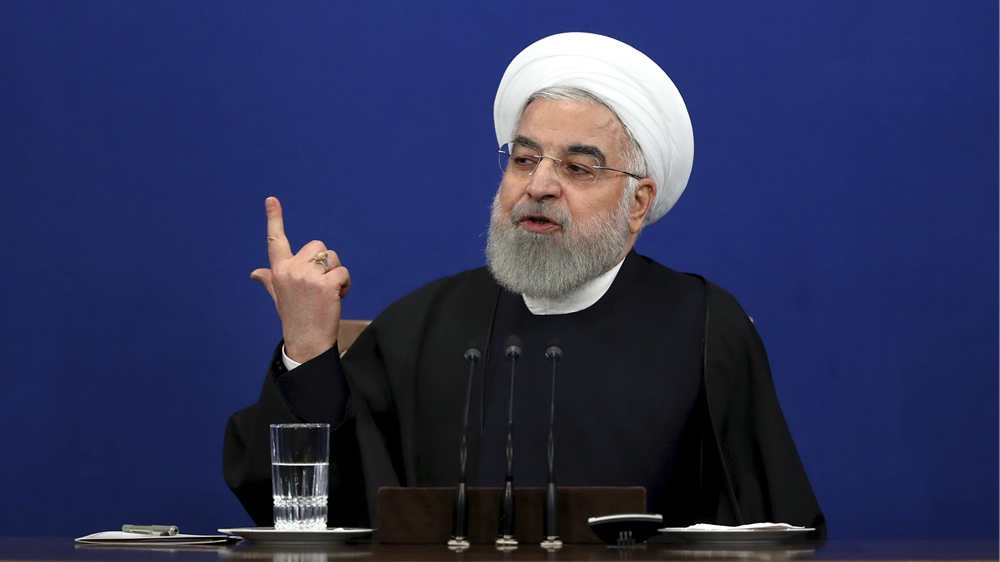 Iranian President Hassan Rouhani said on Wednesday that U.S. President Donald Trump made a "stupid mistake" by pulling out of Tehran's nuclear deal with world powers and called on Washington to lift its sanctions.
Trump pulled the United States out of the pact in May 2018, arguing it did not go far enough to constrain Tehran's missile program and influence in the region.
"Trump made a stupid mistake by exiting the nuclear deal," Rouhani said. "If America wants to return to the deal, it should lift all the sanctions on Tehran and compensate for the re-imposition of sanctions."

He also threatened a "crushing response" if the U.S. goes ahead with plans to extend an embargo on Iranian trade of conventional arms, which the United Nations is set to lift later this year.
"Iran will give a crushing response if the arms embargo on Tehran is extended," Rouhani warned.

The UN weapons embargo is due to expire in October under the deal. Washington says it wants to extend the embargo.
Read more:
Rouhani warns U.S. against 'plotting against Iran every day'
Timeline: Is the landmark Iran nuclear deal coming to an end?

Iran and the U.S. have been at loggerheads for decades. Tensions between them have escalated since Washington's unilateral withdrawal from the multinational accord and re-imposed crippling sanctions on Iran's economy. Iran also took steps to end its commitments to the deal.

Their tensions further rose this year, following the killing of Iran's top military commander Qasem Soleimani in a U.S. drone strike near Baghdad airport in Iraq in early January.

Iran has criticized European parties to the deal for failing to salvage the pact by shielding its economy from U.S. sanctions.
"Iran's nuclear steps are reversible if other parties to the deal fulfill their obligations and preserve Tehran's interests under the pact," Rouhani said.
With Iran seriously hit by the COVID-19 outbreak, China has urged the U.S. to lift "immoral" sanctions on the country.
In a recent phone conversation with his Chinese counterpart, Rouhani said the illegal unilateral sanctions imposed on Iran should be lifted immediately.