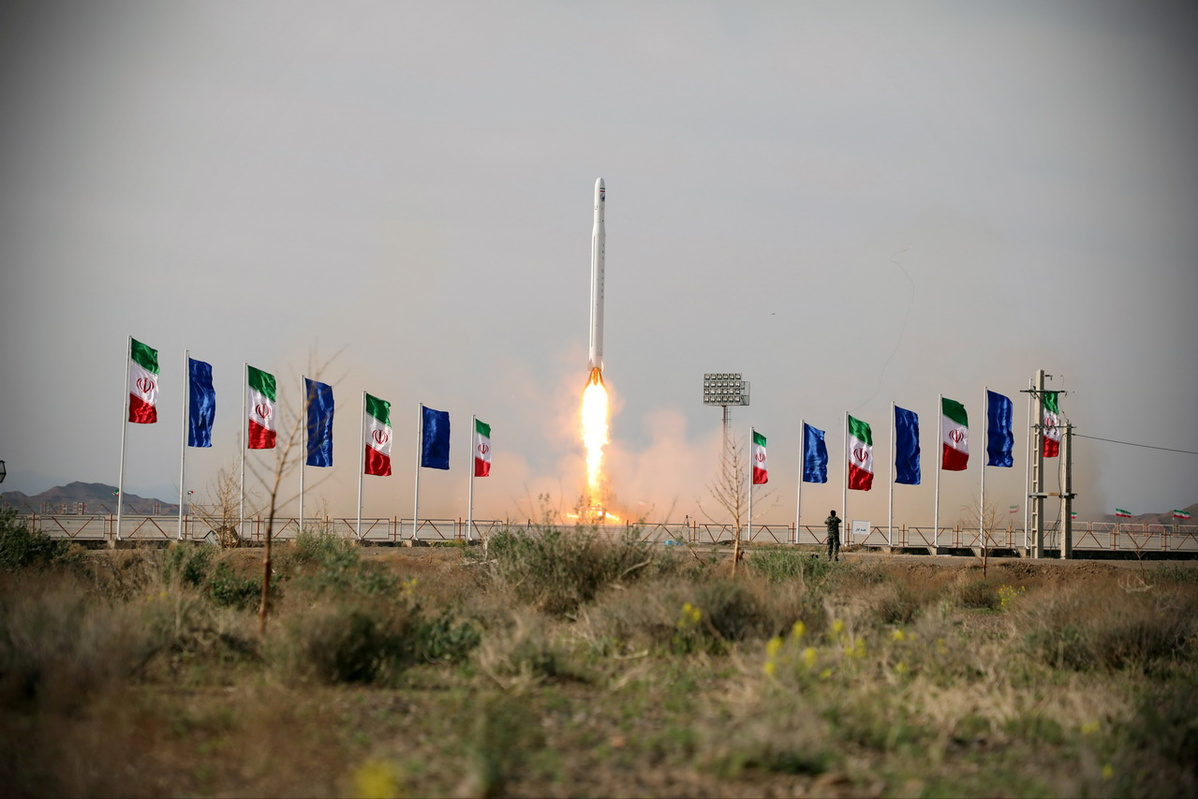 WASHINGTON－Tensions between Washington and Teheran flared anew on Wednesday after Iran's Revolutionary Guard launched the country's first military satellite and US President Donald Trump threatened to "shoot down and destroy" any Iranian gunboats that harass US Navy ships.

After Iran's announcement of the launch, Trump wrote on Twitter, without citing any specific incident: "I have instructed the United States Navy to shoot down and destroy any and all Iranian gunboats if they harass our ships at sea."

On Thursday, Hossein Salami, the head of the Guard, said Iran will destroy US warships if its security is threatened in the Gulf.

Last week, the US Navy reported that 11 Iranian naval gunboats had carried out "dangerous and harassing approaches" to US Navy and Coast Guard vessels in the Persian Gulf. The US vessels used a variety of nonlethal means to warn off the Iranian boats, and they eventually left. Such encounters were relatively common several years ago, but have been rare recently.

"We don't want their gunboats surrounding our boats, and traveling around our boats and having a good time," Trump said. "We're not going to stand for it. ... They'll shoot them out of the water."

Iran said the US was to blame for last week's incident.

Conflict between Iran and the US escalated after the Trump administration withdrew from a landmark nuclear deal between Teheran and world powers in 2018 and reimposed crippling sanctions. Last May, the US sent thousands more troops, including long-range bombers and an aircraft carrier, to the Middle East in response to what it called a growing threat of Iranian attacks on US interests in the region.

The tensions spiked when US forces killed Iranian general Qasem Soleimani in January. Iran responded with a ballistic missile attack on a base in western Iraq where US troops were present. No US personnel were killed but more than 100 suffered mild traumatic brain injuries from the blasts.

Iran considers the heavy US military presence in the Middle East a threat to its security.

Trump did not cite a specific Iranian provocation in his tweet or provide details. Senior Pentagon officials gave no indication that Trump had directed a fundamental change in military policy on Iran.

"The president issued an important warning to the Iranians," David Norquist, the deputy secretary of defense, said at a Pentagon news conference when asked about the tweet. "What he was emphasizing is, all of our ships retain the right of self-defense."

Representative Elaine Luria, a US Navy veteran, said Trump's tweeting could lead to war. "The president's continued issuing of orders to our military via tweet is a threat to our national security and, if followed without clear guidance and rules of engagement, will unnecessarily escalate tensions with Iran and possibly lead to all-out conflict."

General Abolfazl Shekarchi, a spokesman for Iran's armed forces, accused Trump of "bullying" and said the US leader should focus on caring for US service members infected with the coronavirus. The US military has more than 3,500 confirmed cases of coronavirus.

The space launch has potentially bigger implications for conflict with Iran. US officials believe it is intended to advance Iran's development of intercontinental-range ballistic missiles.

Using a mobile launcher at a new site, the Guard said it put a "Noor", or "Light", satellite into a low orbit circling the Earth. Iranian state TV late on Wednesday showed footage of what it said was the satellite, and said it had orbited the Earth within 90 minutes. State TV said the satellite's signals were being received.

US Secretary of State Mike Pompeo said the United Nations needs to evaluate whether the space launch was consistent with Security Council resolutions."I don't think it remotely is, and I think Iran needs to be held accountable for what it's done," Pompeo said.