Iran says nuclear deal salvageable but will not 'negotiate forever'

Iran on Saturday said it believes that a reinstatement of its 2015 nuclear deal with major world powers is possible, but warned that it "will not negotiate forever."

"Out of a steadfast commitment to salvage a deal that the US tried to torpedo, Iran has been the most active party in Vienna, proposing most drafts," Iranian Foreign Ministry spokesperson Saeed Khatibzadeh tweeted, referring to talks aimed at reviving the nuclear deal.

"Still believe a deal is possible, if the US decides to abandon Trump's failed legacy. Iran will not negotiate forever," he added. 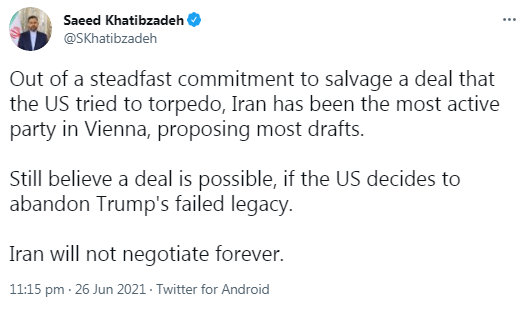 In May 2018, the U.S. government under then President Donald Trump withdrew from the deal, formally known as the Joint Comprehensive Plan of Action (JCPOA), and unilaterally reimposed sanctions on Tehran. In response, Iran gradually stopped implementing parts of its commitments under the agreement from May 2019.

The UN nuclear watchdog on Friday demanded an immediate reply from Iran on whether it would extend a monitoring agreement that expired overnight. An Iranian envoy responded that Tehran was under no obligation to provide an answer.

U.S. Secretary of State Antony Blinken later warned that the absence of an interim agreement to monitor Iran's nuclear activities could prompt the U.S. to abandon efforts to rejoin the nuclear deal.

He also admitted that the U.S. and Iran still have "significant differences" in restoring the JCPOA but hoped a resumption of talks in the coming days could resolve them.

Washington and Tehran have had six rounds of indirect negotiations in the Austrian capital Vienna since April.

The Iranian President-elect Ebrahim Raisi on Monday urged the U.S. to lift "all unjust sanctions" against Iran and ruled out a meeting with President Joe Biden in his first press conference held after the election.