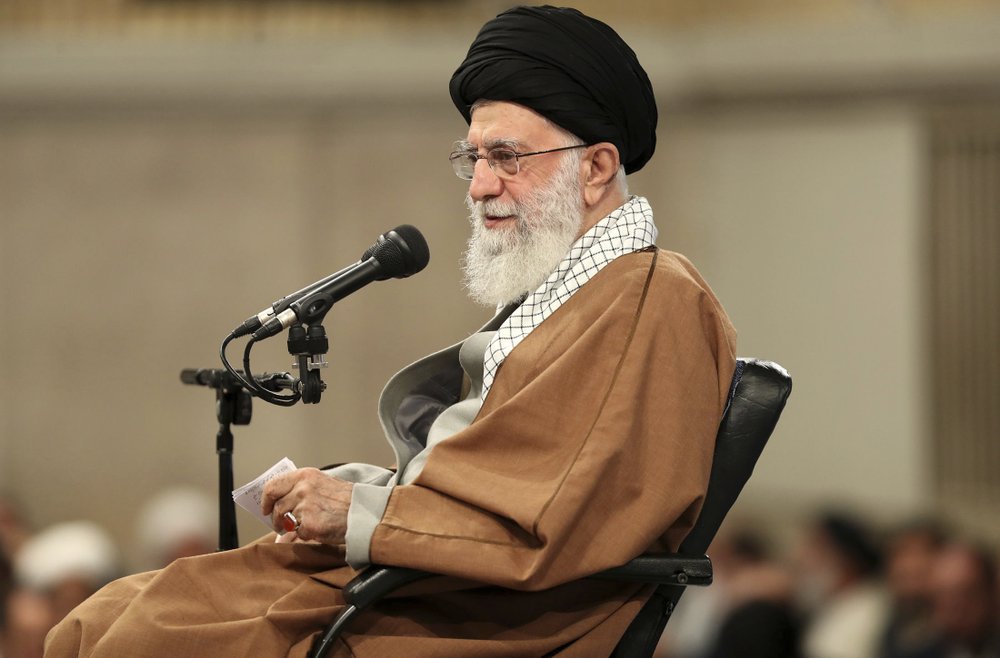 In this picture released by the official website of the office of the Iranian supreme leader, Supreme Leader Ayatollah Ali Khamenei speaks in a meeting with members of the Revolutionary Guard's all-volunteer Basij force in Tehran, Iran, Wednesday, Nov. 27, 2019. (Photo: AP)

Protesters angry over government-set gasoline prices spiking in Iran attacked hundreds of banks, police outposts and gas stations in the demonstrations, Tehran acknowledged Wednesday as its supreme leader alleged without evidence that a “conspiracy” involving the US caused the unrest.

Supreme Leader Ayatollah Ali Khamenei made the comment while addressing members of the Revolutionary Guard’s all-volunteer Basij force, which help put down the demonstrations. Meanwhile, one lawmaker was quoted as saying authorities arrested more than 7,000 people over the protests while a security official claimed demonstrators attempted to take over Iranian state television.

The remarks represent the latest swing in the response by Iran’s Shiite theocracy to the protests, which has seen officials either downplay or demonize demonstrators. Unlike the 2009 Green Movement protests over Iran’s disputed presidential election, or its 2017 economic protests, demonstrations this month rapidly turned violent within a day, showing the boiling anger of many as the country’s economy struggles under renewed American sanctions.

Iran’s government still hasn’t offered any statistics on injuries, arrests or deaths in the protests and security crackdown that followed government-set gasoline prices rising Nov. 15. Amnesty International says it believes the violence killed at least 143 people, which Iran disputes without offering any evidence to support its claims.

In comments reported by state media, Khamenei said the Iranian people extinguished “a very dangerous deep conspiracy that cost so much money and effort.” He praised the police, the Guard and the Basij for “entering the field and carrying out their task in a very difficult confrontation.”

Khamenei, who has the final say on all matters of state, described the protests as being orchestrated by “global arrogance,” which he often uses to refer to the US, “and Zionists.” He described America as seeing the price hikes as an “opportunity” to bring their “troops” to the field but the “move was destroyed by the people.”

Wednesday marks the 40th anniversary of the creation of the Basij. Videos from the protest purport to show plainclothes Basij officials and others on motorcycles beating and detaining protesters.

Iranian President Hassan Rouhani, a relative moderate within Iran’s ruling Shiite theocracy, similarly blamed America for the protests without offering evidence. He called violent protesters “mercenaries” and “hooligans,” alleging the US sent money over two years to spark the demonstrations.

“We achieved a great national victory against superpowers,” Rouhani said. “This great epic shows the power of our people.”

Late on Wednesday, the state-run IRNA news agency quoted Iran’s Intelligence Ministry claiming that it arrested eight people who it described as receiving CIA training abroad to be “citizen reporters.” The ministry alleged those arrested received instructions to participate in the unrest and make detailed reports, including pictures.

“Six of these people were arrested while attending riots and executing intelligence services’ orders,” the ministry said.

Farsi-language satellite channels abroad have aired video from the protests nonstop, relying on images sent to them by Iranians they refer to as “citizen reporters.” The US Secretary of State Mike Pompeo said Tuesday the State Department had received nearly 20,000 messages, pictures and videos sent from Iran of the protests and the security force crackdown that followed via a channel it set up on the encrypted message app Telegram widely used by Iranians.

Meanwhile, the moderate news website Entekhab quoted Hossein Naghavi Hosseini, a member of parliament’s national security and foreign policy committee, as saying more than 7,000 people had been arrested in the demonstrations. He did not elaborate.

Interior Minister Abdolreza Rahmani Fazli also claimed in an interview late Tuesday on state television that “some 500 people” tried to storm Iran’s state television offices. He did not elaborate and no protests had been previously reported in the northern Tehran neighborhood home to the state broadcaster.

Fazli also estimated as many as 200,000 people took part in the demonstrations, higher than previous claims. He said demonstrators damaged over 50 police stations, as well as 34 ambulances, 731 banks and 70 gas stations in the country.

“We have individuals who were killed by knives, shotguns and fires,” he said, without offering a casualty figure.

Starting Nov. 16, Iran shut down the internet across the country, limiting communications with the outside world. That made determining the scale and longevity of the protests incredibly difficult. While home and office internet have been restored, access on mobile phones had remained rare until Wednesday night. Reports suggested users regained mobile internet access in Tehran and eight other provinces.

The gasoline price hike came as Iran’s 80 million people have already seen their savings dwindle and jobs scarce under crushing US sanctions. President Donald Trump imposed them in the aftermath of unilaterally withdrawing America from Tehran’s nuclear deal with world powers. Iran meanwhile has begun breaking stockpile, centrifuge and enrichment limits set by the accord to pressure Europe into giving it a way to sell its crude oil abroad despite US sanctions.