WORLD Iran says US responsible for consequences of Soleimani's assassination

Iran says US responsible for consequences of Soleimani's assassination 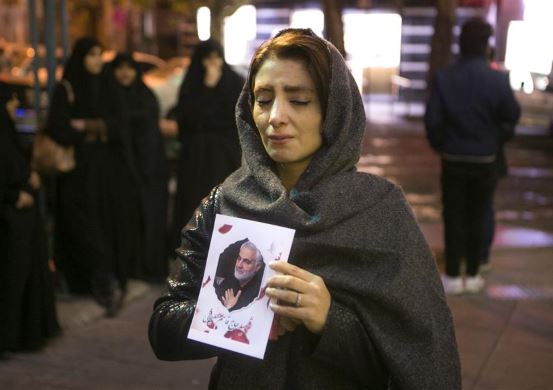 A woman holds a poster of Qasem Soleimani, a top Iranian commander, during a mourning ceremony in Tehran, Iran, Jan. 3, 2020. (Photo: Xinhua)

Zarif made the remarks in a meeting with the visiting Qatari Foreign Minister Sheikh Mohammed bin Abdulrahman Al Thani.

Iran does not seek tensions in the region, but the presence of foreign forces is the cause of instability, insecurity and tensions in our sensitive region, Zarif said, according to official IRNA news agency.

During the meeting, both sides discussed bilateral, regional and international issues, including those related to assassination of the Iranian commander.

Al Thani expressed his concerns about the regional condition after US recent developments and urged the sides for de-escalating tensions.

The visit by Qatari official comes a day after the United States army assassinated the Iranian senior general in Baghdad.

Qatari Foreign Ministry has urged both Iran and the United States to exercise self-restraint amid the escalating tensions and to prevent from "taking Iraq and the region into endless violence."