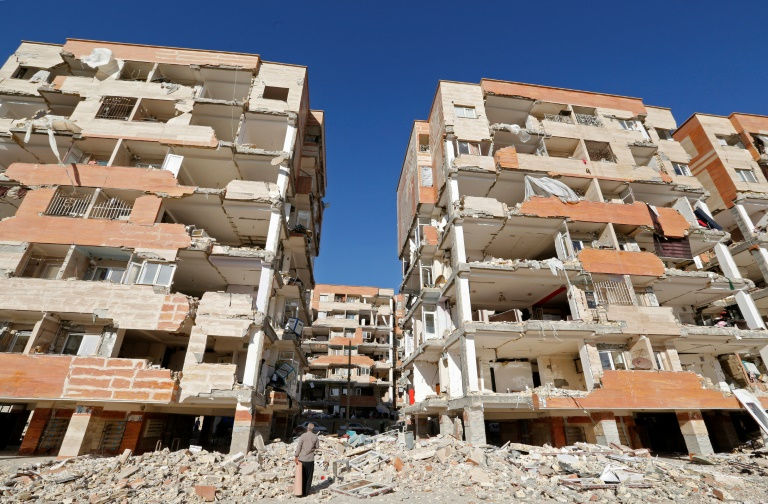 Buildings stand disfigured in the town of Sar-e Pol-e Zahab in Iran's western province of Kermanshah after a 7.3-magnitude earthquake. Photo: AFP

Thousands of Iranians on Tuesday spent a third night in the cold as authorities scrambled to help those made homeless by a major earthquake that killed more than 400 people.

Volunteers also rushed to help after thousands of homes were destroyed in the quake which rocked a region extending across Iran's western province of Kermanshah and neighbouring Iraqi Kurdistan.

But some survivors said not enough was being done.

"We have been here for two days with nothing. We have no tents, no blankets," said one young resident of Sar-e Pol-e Zahab, the city most affected by the disaster.

He accused "dishonest people" from areas not affected by the quake of diverting food and basic necessities destined for the victims.

Many working-class survivors lost everything amid severe damage to social housing blocks built under a scheme championed by former president Mahmoud Ahmadinejad.

In the district of Shahid Shiroudi, the frames and ceilings of the Maskan-e Mehr apartment blocks withstood the quake but their facades collapsed.

From the third floor of one apartment, two men pulled a carpet and dropped it through a gaping space where the outer wall once stood.

"I was living on the fourth floor," said Ali Biabani, a labourer in his 50s.

"We were happy (after buying the flat), because we had escaped poverty," he said, but added: "look yourself, no one can live in there anymore."

The quake killed at least 432 dead in Iran, all in Kermanshah province, and eight in Iraq.

On Tuesday afternoon, residents of Sar-e Pol-e Zahab helped police evacuate an elderly man, his face caked in blood, from a home at risk of imminent collapse.

Several buildings and houses lay in complete ruins, while others stood disfigured. Some structures appeared unscathed.

Rescue workers with sniffer dogs combed the ruins for survivors after at least 280 people were killed in the town of some 85,000 people.

The town centre was clogged with traffic as people from the surrounding province rushed to help with rescue efforts.

Tents, some provided by the Red Crescent, dotted green spaces turned into camps for the displaced. 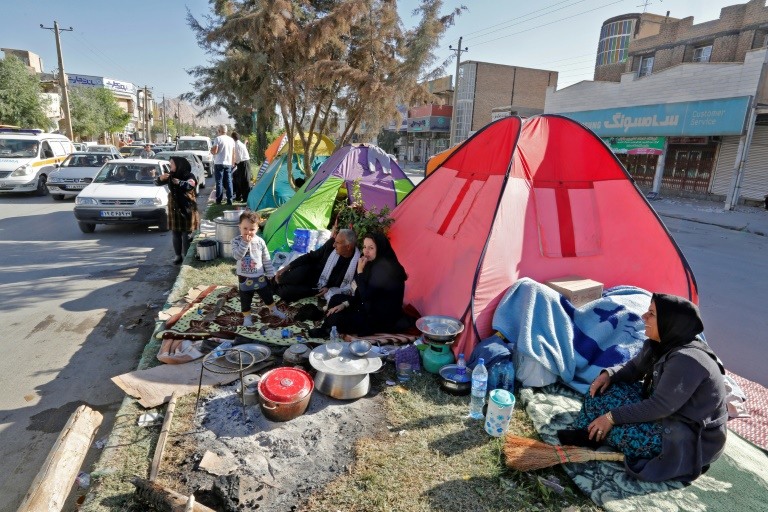 Displaced Iranians sit by their makeshift homes in the town of Sar-e Pol-e Zahab in Iran's western province of Kermanshah after a major earthquake. Photo: AFP

But some did not have shelter in a region where temperatures dropped to 4 degrees Celsius (39 Fahrenheit) on Tuesday night.

"What we need is a tent and covers to be able to get through the night," said 24-year-old mother Shima Maryami Kiani.

Health Minister Hossein Ghazizadeh Hashemi was cited Tuesday by the Tasnim news agency as recognising that aid "distribution was not assured properly" and needed to be improved.

Rouhani landed by helicopter in the city of Kermanshah and promised the government would move swiftly to help those left homeless.

"I want to assure those who are suffering that the government has begun to act with all means at its disposal and is scrambling to resolve this problem as quickly as possible," he said.

Rouhani said all aid would be channelled through the Housing Foundation, a charitable trust and major player in Iran's economy.

A building in Iran's western town of Sar-e Pol-e Zahab is among thousands to have been damaged or destroyed in a major earthquake. Photo: AFP

"Newly constructed buildings... held up well, but the old houses built with earth were totally destroyed," he told state television.

Around 15,500 Iranian homes have been destroyed and another 15,000 damaged in the quake, according to official estimates.

Seven towns and nearly 2,000 villages were damaged, with some villages completely wiped from the map.

On Tuesday, Iran marked a day of mourning, with a black banner adorning the corner of images of the disaster broadcast by state television.

To show solidarity with the Kurdish-majority province hit by the quake, a state newspaper printed a headline in Kurdish, which read "Iran cries with Kermanshah".

Ali Daei, a legend of Iranian football and former national team coach, launched an appeal for food and basic supplies.

A Tehran cinema said it would donate half of its receipts to relief efforts, and the capital's two football teams said they were sending hundreds of tents and blankets.

On Monday, Iranian officials said they were setting up relief camps for the displaced and that 22,000 tents, 52,000 blankets and tonnes of food and water had been distributed.

Iran has experienced at least two major quake disasters since, with more than 600 people killed in 2005 and a further 300 in a 2012 quake.