Even as U.S. sanctions, unemployment, inflation and low oil prices batter the Iranian economy, there seems to be at least one refuge for investors. 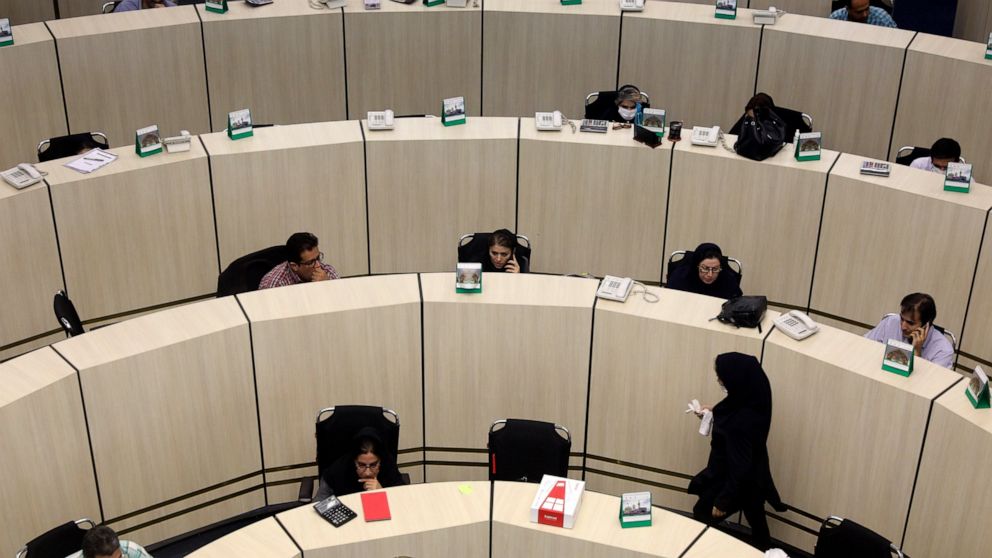 In this Sunday, May 10, 2020 photo, stockbrokers work at the Tehran Stock Exchange in Iran. (Photo: AP)

The Tehran Stock Exchange has seen gains of 225% in the last year, with sharp increases even as the country struggled with one of the first serious coronavirus outbreaks outside of China.

Encouraged by a government eager to privatize state-owned firms, average people now have access to the market and can trade shares, earning returns they'd never see in a savings account or a certificate of deposit.

But these rapid gains increasingly have analysts and experts worried about a growing stock market bubble, one that could be particularly dire and wipe away the earnings of the average people flooding into the market.

"We have witnessed a very strange incident," said Hossein Tousi, a member of Iran's Chamber of Commerce , speaking to 90eghtesadi.com, an Iranian economic review website. "As all markets have fallen, crude prices have fallen sharply, but in our market, the situation is upside-down. It is clear that it is a bubble."

Global stock markets have seen rapid swings amid the coronavirus pandemic. The crisis has sent U.S. unemployment surging to 14.7%, a level last seen during the Great Depression. Benchmark Brent crude prices, trading over $70 a barrel a year ago, now hovers just over $20 a barrel as demand collapses amid an oversupplied market.

But that hasn't slowed in the Tehran Stock Exchange. Founded in 1967, the market lists some 1,000 companies, including major firms like car manufacturer Iran Khodro. The bourse now has a market cap of more than $200 billion. And its daily 5% gains haven't gone unnoticed by ordinary Iranians.

"I visited the related office for several days to receive my Sejam code to get able to trade," said Mohammad Reza Mansouri, who makes deliveries using his personal van. "The office was crowded with people like me."

The exchange lists a half-million active traders out of some 12 million people who registered to buy and sell stocks.

"An everyday 5% percent is very sexy," said Abdollah Rahmani, a retired bank employee who trades stocks. "What other market makes such a profit?"

Even President Hassan Rouhani, beleaguered since U.S. President Donald Trump unilaterally withdrew America from his 2015 nuclear deal with world powers, has pointed to the market as a rare bright spot for the country. Iran's rial currency has fallen to 160,000 to 1 against the U.S. dollar, as opposed to the 35,000 to $1 in 2015.

"As Iran's bourse has developed, (our enemies) become nervous and asked why the market is developing while markets in the world are in chaos," Rouhani said at a Cabinet meeting last month. This rise "is because of efforts by all companies, business people and fortunately offering shares of big companies to the stock market."

The stock market rise in part takes root in how Iran's economy has changed in the decades since its 1979 Islamic Revolution. Immediately after taking power, Iran's Shiite theocracy seized large private industries, putting them in large trusts, or bonyads. The bloody 1980s war with Iraq saw Iran further nationalize its economy.

In the 1990s, Iran began a privatization effort. The stock market became one way to accomplish this, with former hard-line populist President Mahmoud Ahmadinejad giving out so-called "Justice Shares" in firms to the poor. Some 50 million Iranians now hold those shares.

But Ahmadinejad's efforts at privatization also saw firms sold off to the paramilitary Revolutionary Guard and its allies, further empowering the hard-line force answerable only to Supreme Leader Ayatollah Ali Khamenei. Some firms that moved into private ownership have seen the businesses stripped and later collapse, leaving workers without pensions and fueling sporadic protests.

Lower returns in other investments also are sending people to the stock market.

"The rise in liquidity in Iran's financial market has made people expect high inflation in future," said Reza Khanaki, a Tehran-based financial analyst and manager. "Their bank deposits are yielding profits less than the inflation rate, and so they are shifting their investments to the stock market. This change is causing the rise in the index."

Squeezed by U.S. sanctions, Rouhani's government hopes to raise money through selling assets on the exchange. His government in January also allowed firms to recalculate their values, something critics warn masks the true worth of their production by instead inflating the price of land they own, for instance.

"The Iranian financial press as well as foreign economists have raised concerns that the meteoric rise of the market is detached from the underlying value of the assets traded there and that bubbles have formed," said Henry Rome, an analyst at the Eurasia Group. "The government's decision to focus privatization attention on the market has elevated these risks. A loss of confidence in the market could lead to a destabilizing crash."

Iranian political analyst Akbar Mokhtari warns it could be even worse, comparing the "Justice Shares" to Shah Mohammad Reza Pahlavi's so-called "White Revolution" in the 1960s that broke up the control of feudal land barons and saw the poor rush into cities. Those poor became the backbone of the protests that later drove him from power.

"The other side of this very important economic development can be the impatience of shareholders about possible crashes that can cause instability in the government," he was quoted as saying by Rahbord, an Iranian political review channel on Telegram.

Already, the exchange has seen some stumbles. On Saturday, the market closed at 987,475 points, down some 60,300 points compared to last Monday, when it reached a record high of over 1 million points.

But some, like Mansouri, the stock-trading deliveryman, say those fears don't bother them.

"I do not care about the analysis as long as I profit day by day," he said.