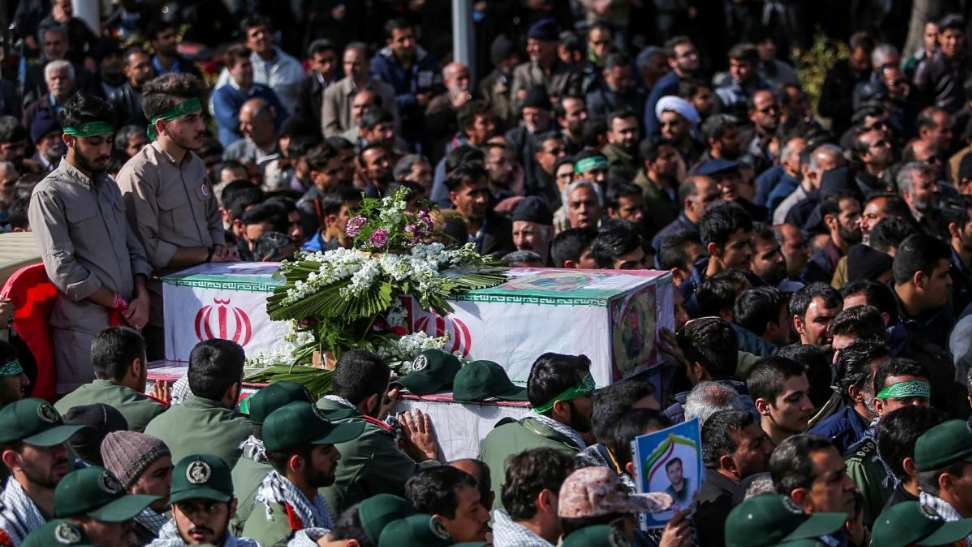 Members of Iran's elite Revolutionary Guards gather around the coffins of their fellow guards, who were killed by a suicide car bomb, during the funerals in Isfahan, Iran, on February 16, 2019. (Photo: CGTN)

Iran's foreign ministry on Sunday summoned the Pakistani ambassador after Tehran accused Islamabad of harboring a jihadist group behind a deadly suicide attack on security forces.

"The Islamic Republic of Iran expects Pakistan's government and army to seriously confront... the terrorist groups active on its border with Iran," the foreign ministry said in a statement.

An Iranian official at the ministry called on Pakistan to quickly take the necessary steps for the identification and arrest of the attack's perpetrators.

The suicide bombing on Wednesday killed 27 members of Iran's Revolutionary Guards traveling on a bus in the volatile southeastern province of Sistan-Baluchistan, which straddles the border with Pakistan.

The attack was claimed by the jihadist outfit Jaish al-Adl ("Army of Justice").

It was formed in 2012 as a successor to the Sunni extremist group Jundallah (Soldiers of God), which waged a deadly insurgency for a decade before it was severely weakened by the capture and execution of its leader Abdolmalek Rigi in 2010.

"The government of Pakistan must pay the price of harboring these terrorist groups, and this price will undoubtedly be very high," Jafari told mourners gathered at funerals for the dead in the city of Isfahan.

Iran's supreme leader Ayatollah Ali Khamenei has also linked the perpetrators of Wednesday's attack to "the spying agencies of some regional and trans-regional countries."