WORLD Iran tells Europe to step up and save nuclear deal

Iran tells Europe to step up and save nuclear deal 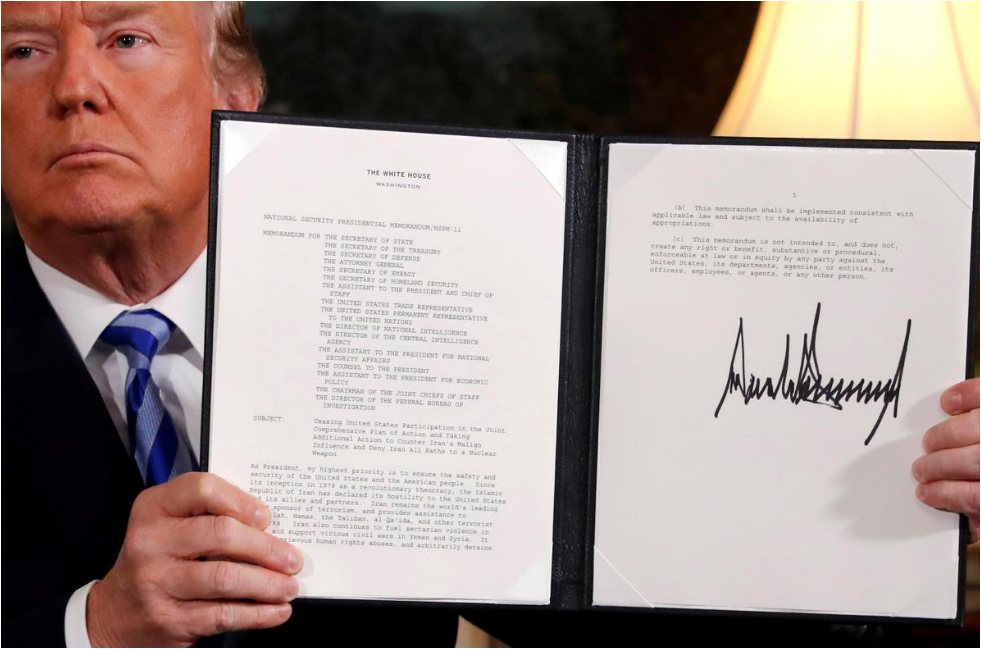 US President Donald Trump holds up a proclamation declaring his intention to withdraw from the JCPOA Iran nuclear agreement after signing it in the Diplomatic Room at the White House in Washington, US May 8, 2018. (Photo: Reuters)

Iran poured scorn on threatened US sanctions on Tuesday and told European powers to step up and salvage its international nuclear deal - though Germany signaled there was only so much it could do to fend off Washington’s economic clout.

Senior Iranian military and political figures queued up to issue defiant statements a day after Washington threatened “the strongest sanctions in history” if Iran failed to make a series of sweeping changes.

Two weeks on from US President Donald Trump’s decision to pull out of the nuclear pact, his administration told Iran to drop its nuclear program and pull out of the Syrian civil war among other demands, setting Washington and Tehran further on a course of confrontation.

“The people of Iran should stand united in the face of this and they will deliver a strong punch to the mouth of the American Secretary of State and anyone who backs them,” Ismail Kowsari, a senior commander with Iran’s Revolutionary Guards said, according to the Iranian Labour News Agency.

The 2015 nuclear agreement, worked out by the United States, France, Germany, Britain, Russia, China and Iran, lifted sanctions on Iran in exchange for Tehran limiting its atomic program.

Trump called it the worst deal ever negotiated but European powers see it as the best chance of stopping Iran developing a nuclear bomb.

After Trump pulled out, the other signatories said they would try to salvage the deal and keep Iran’s oil trade and investment flowing. But European companies say they are worried about getting caught up in the new US sanctions, given the extent of Washington’s global reach, and some have already started pulling out.

The head of Iran’s National Security and Foreign Policy committee in parliament said that the only way to salvage the nuclear deal would be for the European signatories to stand up to the United States.

“Today they must show their strength in the face of American pressure,” Alaeddin Borujerdi said, according to the Iranian Students’ News Agency.

German Foreign Minister Heiko Maas on Monday told reporters in Argentina he would travel on from there to Washington to discuss the nuclear deal with US Secretary of State Mike Pompeo. He gave no date for his meeting.

Germany’s economy minister earlier told a newspaper the Berlin government would help German firms with business in Iran where it could, but could not entirely shield them from the US decision to quit the Iran nuclear deal and reimpose sanctions.

Asked how the German government could assist German firms feeling nervous in the wake of the US decision, Peter Altmaier told the Passauer Neue Presse newspaper that Berlin would help them assess the situation and developments while also urging the US to grant exemptions and deadline extensions.

“We will help where we can, but there is no way of completely averting the consequences of this unilateral withdrawal,” he said.

His statement was echoed by Luxembourg’s foreign minister Jean Asselborn who said there were limits to the European Union’s powers to persuade its larger firms to stay in Iran in the face of threatened US sanctions.

“We know there are hardly any larger companies in Europe that do not also trade with the United States. The pressure on European companies from the US is quite large,” he told reporters in Brussels. “We are in the situation that we’re in.”

“I believe we should not give up, we should try until the end, to show, with our heads held high, that we are right and Mr. Trump is wrong,” he added.

French President Emmanuel Macron last week acknowledged the dilemma faced by firms choosing between trading with the biggest economy in the world, the United States, and risking sanctions and massive fines by trading with Iran.