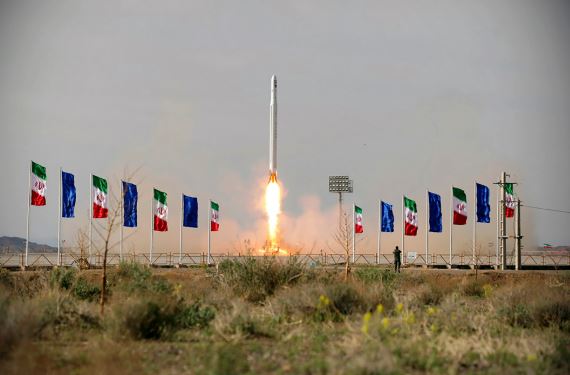 An Iranian rocket carrying a satellite is launched from an undisclosed site believed to be in Iran’s Semnan province, April 22, 2020. (Photo: AP)

TEHRAN, May 2 (Xinhua) -- Iranian government on Saturday threatened that in case the arms embargo against Iran is extended, it will trigger a "harsh" response from the country.

Speaking to Tasnim news agency on Saturday, Ali Rabiee, the spokesman for the Iranian administration, decried the US' push for extending the UN Security Council's arms embargo against Iran, saying the White House must realize that "international treaties are not toys."

US Secretary of State Mike Pompeo said on Wednesday that Washington was considering "every possibility" to renew the ban on selling conventional arms to Iran.

"We're not going to let that happen," he said, adding that the US administration is urging the three European signatories to the JCPOA "to take action which is within their capacity today."

The United States will urge the UN Security Council to extend JCPOA-endorsed arms embargo on Iran which ends in six months' time, he added.

In response to Pompeo's remarks, Rabiee said, "You're wrong. Other countries are not playthings in your hands, and they do honor international commitments."

The UN Security Council members and the JCPOA parties are well aware that extension of the arms embargo on Iran will have "dire consequence" not only for the JCPOA but also for regional security and stability, he said.

"We think we have sent this clear message to the United States and others that extension of the arms embargo on Iran contravenes the previous agreements and will draw a harsh reaction from the Islamic Republic of Iran," Rabiee underlined.

There is no place for such bullying acts in the international arena, he said, adding that "we believe that the JCPOA member states and the permanent members of the UN Security Council will definitely oppose this American law-breaking."

Besides, Iran's envoy to the United Nations said the US call for the extension of the UN arms embargo on Iran lacks a legal standing and it will be turned down at the UN Security Council, state TV reported on Saturday.

The world's countries "will not accept to be a partner in the Americans' very ugly measure that runs against international law," Majid Takht-Ravanchi made the remarks on Friday after Washington drafted a resolution to indefinitely prolong the arms embargo on Iran.

"That the United States wants to say it is a member of the JCPOA (the Iranian 2015 nuclear deal) and use the path of UN Security Council Resolution 2231 (which has endorsed the 2015 multilateral nuclear deal) is similar to a joke," Takht-Ravanchi was quoted as saying.

He said that by withdrawing from the Iranian nuclear deal in 2018, the United States has violated both Resolution 2231 and its commitments stipulated under the JCPOA.

"What the US Secretary of State Mike Pompeo and some other US officials said ... have no legal standing in international law," Takht-Ravanchi stressed.