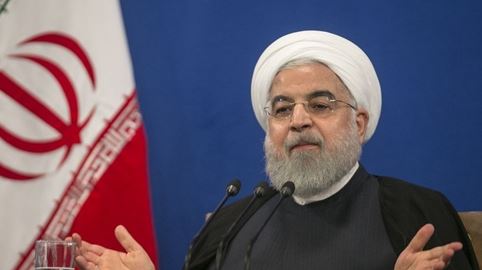 Rouhani said the aim was to reduce "hardships" in the Islamic republic where a sharp fuel price hike last month triggered nationwide demonstrations that turned deadly.

The US sanctions imposed last year in a bitter dispute centered on Iran's nuclear program include an embargo on the oil sector whose sales Washington aims to reduce to zero in a campaign of "maximum pressure."

Iran has suffered a sharp economic downturn, with a plummeting currency sending inflation skyrocketing and driving up import prices.

"We know that under the situation of sanctions and pressure, people are in hardship. We know people's purchasing power has declined," he said.

The budget would benefit from a $5 billion "investment" from Russia which was still being finalized, said Rouhani.

Iran and Russia have strengthened ties in recent years, with both backing President Bashar al-Assad in Syria's civil war.

Rouhani told lawmakers the budget, which includes a 15 percent public sector wage hike, "is a budget of resistance and perseverance against sanctions."

He said the fiscal plan came in response to the "maximum pressure and continuation of America's sanctions" and vowed it would signal "to the world that, despite sanctions, we will manage the country, especially in terms of oil."

Iran, a founding member of the Organization of the Petroleum Exporting Countries (OPEC), sits on the world's fourth-biggest oil reserves and second-largest gas reserves.

Rouhani said that despite the US sanctions, his government expected to earn almost 455 trillion rials from oil exports.