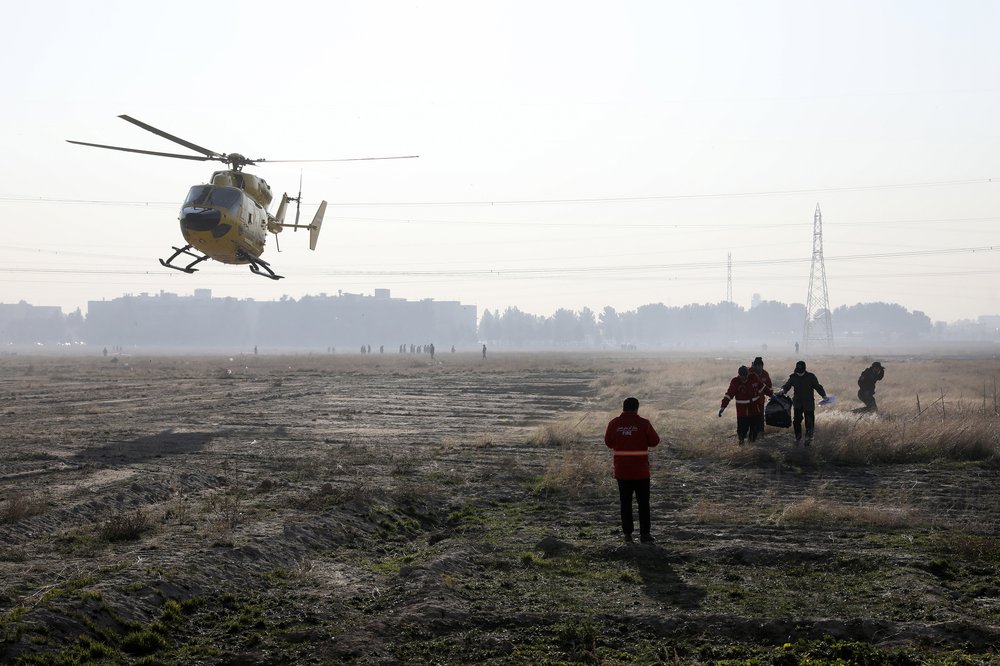 Rescue team work at the scene where an Ukrainian plane crashed in Shahedshahr, southwest of the capital Tehran, Iran, Wednesday, Jan. 8, 2020. (Photo: AP)

TEHRAN/WASHINGTON, Jan. 10 (Xinhua) -- Iran on Friday urged all parties involved to contribute to a probe into the crash of a Ukrainian airliner which killed all 176 people on board on Wednesday.

"According to international regulations, representatives from the civil aviation agency of the country where the crash has taken place (Iran), the civil aviation agency of the country which has issued the airworthiness certificate (Ukraine), the owner of the airliner (Ukraine International Airlines), the aircraft manufacturer (Boeing Co.), and the jet engine manufacturer (CFM International) can participate in the investigation process," Ali Rabiei, spokesman for the Iranian administration, said in a statement.

U.S. media reported on Thursday that U.S. officials "increasingly believe" that the wrecked plane was mistakenly shot down by Iran, while Iranian authorities insisted that a technical failure was the cause, dismissing claims that a terrorist attack, explosion or shooting at the plane may have caused the incident.

"Had it been the case, the plane must have exploded up in the air, but that has not happened, because the plane caught fire due to a technical failure. The problem first caused its communication and control systems to stop working, and subsequently resulted in its crash," Iranian Minister of Road and Urban Development Mohammad Eslami said Thursday.

Ukrainian President Volodymyr Zelensky said on Thursday that Ukraine is ready to join in the investigation according to international law, noting that a group of Ukrainian experts arrived in Iran Wednesday and would make an on-the-spot investigation at the plane crash site.

Iran called on Boeing to dispatch its own representative to participate in the process of reading the black box data. Boeing said Wednesday that it is ready to provide any necessary assistance.

Iran also invited the U.S. National Transportation Safety Board (NTSB) to take part in the investigation. The NTSB announced Friday it would join the probe into the crash and has designated an accredited representative.

"The NTSB continues to monitor the situation surrounding the crash and evaluate its level of participation in the investigation," which will be led by Iran, the NTSB statement said.

"ICAO is in contact with the States involved and will assist them if called upon. Its leadership is stressing the importance of avoiding speculation into the cause of the tragedy pending the outcomes of the investigation," the UN agency said in a statement released Wednesday.

British Prime Minister Boris Johnson said on Friday that four British nationals were among the victims.

"We are working closely with Canada and our international partners and there now needs to be a full, transparent investigation ... The UK continues to call on all sides urgently to deescalate to reduce tensions in the region," Johnson said.

Canadian Prime Minister Justin Trudeau said on Thursday that there were 63 Canadian citizens among the passengers aboard the ill-fated Ukrainian flight.

He said his government has intelligence indicating that an Iranian surface-to-air missile shot down the plane.

Canada's Transportation Safety Board accepted the invitation of Iran's accident investigation agency to work with other groups and organization already on site.

Iran welcomed the participation of all countries whose nationals were on the ill-fated airliner.