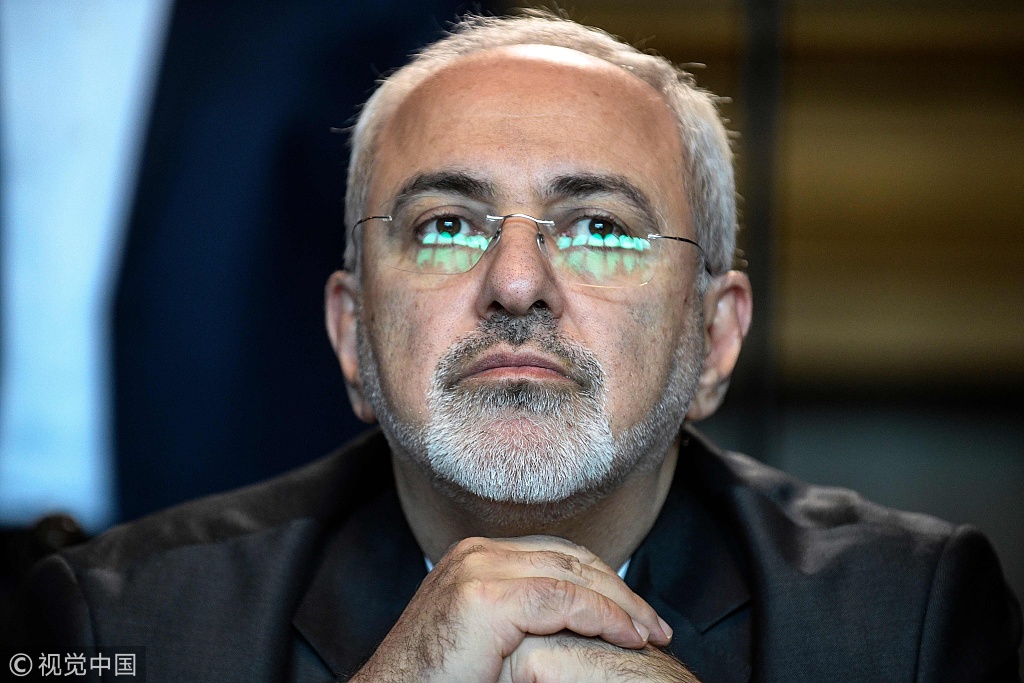 Iranian Foreign Minister Mohammad Javad Zarif is pictured during a meeting with his Russian counterpart in Moscow on April 28, 2018. (File photo: VCG)

The European parties to the Joint Comprehensive Plan of Action (JCPOA) have taken a series of measures after putting forward a package for saving the nuclear deal, Zarif was quoted as saying.

"These measures (by Europe) have been an announcement of stances rather than operational measures. Though they (Europeans) have moved forward, we believe that Europe is not still ready to pay the price," Zarif said.

The JCPOA restricts Iran's nuclear activities in exchange for the easing of sanctions on the Islamic republic.

On May 8, US President Donald Trump pulled Washington out of the deal and vowed to reinstate sanctions against Tehran to make the latter "change behavior."

Last month, the European Union updated a legislation aimed at countering sanctions by the United States on businesses operating in Iran as part of its pledge to uphold the nuclear deal after Washington pulled out.

It also authorized the European Investment Bank (EIB) to finance Iranian projects, while noting it was up to the bank to give the improvement for any investments.

The European countries should take on their responsibilities to compensate for the relapse of US sanctions following Washington's exit from the deal, Zarif said after the EU decision.

On Sunday, Iranian First Vice President Es'haq Jahangiri also said Iran is looking for solutions to continue its sale of crude oil and get money back to the country after the United States decided to reimpose its sanctions on the country's energy sector in November.

The European countries have pledged to take measures before US sanctions come into effect against the country's oil and banking sectors to make up for any possible losses that Tehran may suffer, Jahangiri was quoted as saying by Press TV.

He said the US sanctions have so far not limited European countries in the economic sector, particularly with regard to oil purchases and trade.

Although some private companies, particularly Europeans, have left Iran after the reimposition of the US sanctions, their move has not been "very determining," said Jahangiri.

Trump signed an executive order on Aug. 6 reimposing the first round of sanctions on Iran, which had been lifted under the nuclear deal, to levy "maximum economic pressure" on the Islamic Republic.

The sanctions will cover Iran's purchases of US dollars, its trade in gold and precious metals, and its automotive sector.

The second round of embargo will be reimposed in early November with the aim of curtailing Iran's oil exports and shipping sectors.

Besides, Iran called on the Organization of the Petroleum Exporting Countries (OPEC) on Sunday to prevent efforts by "certain member states" to take over its share of the oil market.

It referred to speculations that Saudi Arabia would pump more oil to fill Iran's gap once US sanctions against the Islamic Republic come into effect, Press TV reported.

Kazem Gharibabadi, Iran's representative to the OPEC, said that the organization should do more to "fully protect" its member states against countries that "were trying to politicize the group."

"No other OPEC member state can take over the market share of other member states under any condition and no such authorization was ever issued during the organization's last ministerial conference," Gharibabadi was quoted as saying.

"Besides, the technical conditions of other producers do not allow this," he said, stressing that the OPEC needed to remain an independent organization immune to political pressures.