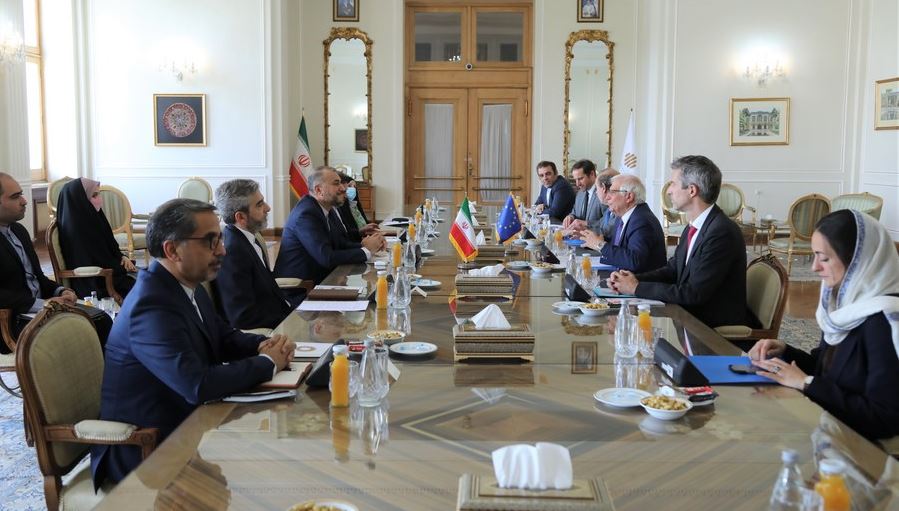 The United States, in order to rejoin the Iranian nuclear deal, must prove it reliable and show that it abides by the international norms, Iranian Foreign Ministry Spokesman Nassar Kanaani said Monday.

"The country, which unilaterally withdrew from the agreement signed in 2015, has hindered the achievement of an agreement based on joint interests ... has imposed illegal, unilateral and irrational sanctions (on Iran), and has no right to be a claimant and take a creditor's pose," Nassar Kanaani told reporters during his weekly press conference.

"The U.S. government needs to take a constructive approach to reaching an agreement," he noted.

In its recent response to the EU's proposal on restoring the 2015 nuclear deal, formally known as the Joint Comprehensive Plan of Action (JCPOA), Iran has not raised any new issues or "any serious demands" that would hinder the achievement of a possible agreement, Kanaani said, calling the Western parties' pressures following Iran's response as "psychological warfare."

The recent statement of the European troika of France, Germany and Britain about Iran's response to an EU nuclear proposal was "wrong" and "untimely," Kanaani said.

On Saturday, France, Germany and Britain said in a joint statement that Iran "has chosen not to seize this critical diplomatic opportunity" given by a recent EU-submitted "final set of texts" to rescue the JCPOA, voicing their "serious doubts as to Iran's intentions and commitment to a successful outcome on the JCPOA."

"An agreement is a two-way road, and it was expected that the negotiating parties would act constructively in this direction," Kanaani said.

It is regretful that the European troika, instead of responding positively to the "constructive" actions of Iran in the course of reaching an agreement and its cooperation with the International Atomic Energy Agency (IAEA), has been influenced by a country, which is not a member of any safeguards systems of the IAEA, the Iranian spokesman said, alluding to Israel's allegations against Iran's nuclear program.

Kanaani urged the IAEA to fulfill its duties professionally and avoid the impacts of pressures from third parties, particularly from Israel.

Iran signed the JCPOA with world major powers in July 2015, agreeing to curb its nuclear program in return for removing sanctions on the country. However, former U.S. President Donald Trump pulled Washington out of the agreement and reimposed unilateral sanctions on Tehran, prompting the latter to drop some of its commitments under the pact.

The talks on the JCPOA's revival began in April 2021 in Vienna but were suspended in March this year because of political differences between Tehran and Washington. The latest round of the nuclear talks was held in the Austrian capital in early August after a five-month hiatus.

On August 8, the EU put forward its final text of the draft decision on reviving the JCPOA. Iran and the United States later indirectly exchanged views on the EU proposal.

U.S. Secretary of State Antony Blinken said on Friday that Iran's latest response has pushed the negotiations a step back.