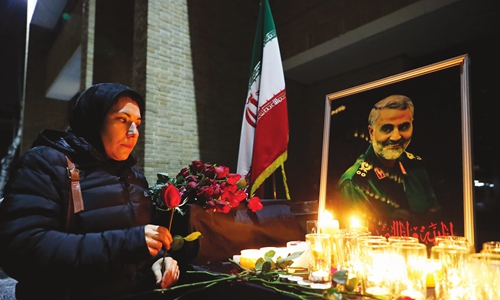 Iran and the US are not only engaged in military tensions, as their embassies in China engaged in a verbal fight on China's Twitter-like Sina Weibo.

The Iranian embassy's Chinese-language posts about the country's retaliatory attacks on the US military bases in Iraq on Sina Weibo won overwhelming attention from Chinese netizens.

The US embassy posted US President Donald Trump's press conference in response to the Iranian attacks, also in Chinese. Before that, the account had posted content condemning Iranian major general Qasem Sleimani, who had been killed in drone strikes on January 3.

Chinese net users, who had been concerned about the escalating tensions, were amused by the word war between the two embassies.

One post that was liked many times said that "After Americans blocked the Twitter account of Iran's leader Ayatollah Ali Khamenei, Iran and the US got into a fight in standard Chinese language on a Chinese social media platform."

"It appears that Weibo is freer than Twitter when it comes to affairs related to the US," a Weibo user posted.

"A word war is better than a real war at least, and we are glad to offer such a platform," said another Weibo user.

Some net users jokingly suggested the two sides could even have a face-to-face battle in Beijing's Liangmaqiao area where most of the foreign embassies are located.

Iranian embassy's Weibo account gained the overwhelming attention of Chinese netizens, with 200,000 followers as of press time, more than five times the number two days ago.