WORLD Iran-US tension continues to escalate ahead of Biden's inauguration

Iran-US tension continues to escalate ahead of Biden's inauguration 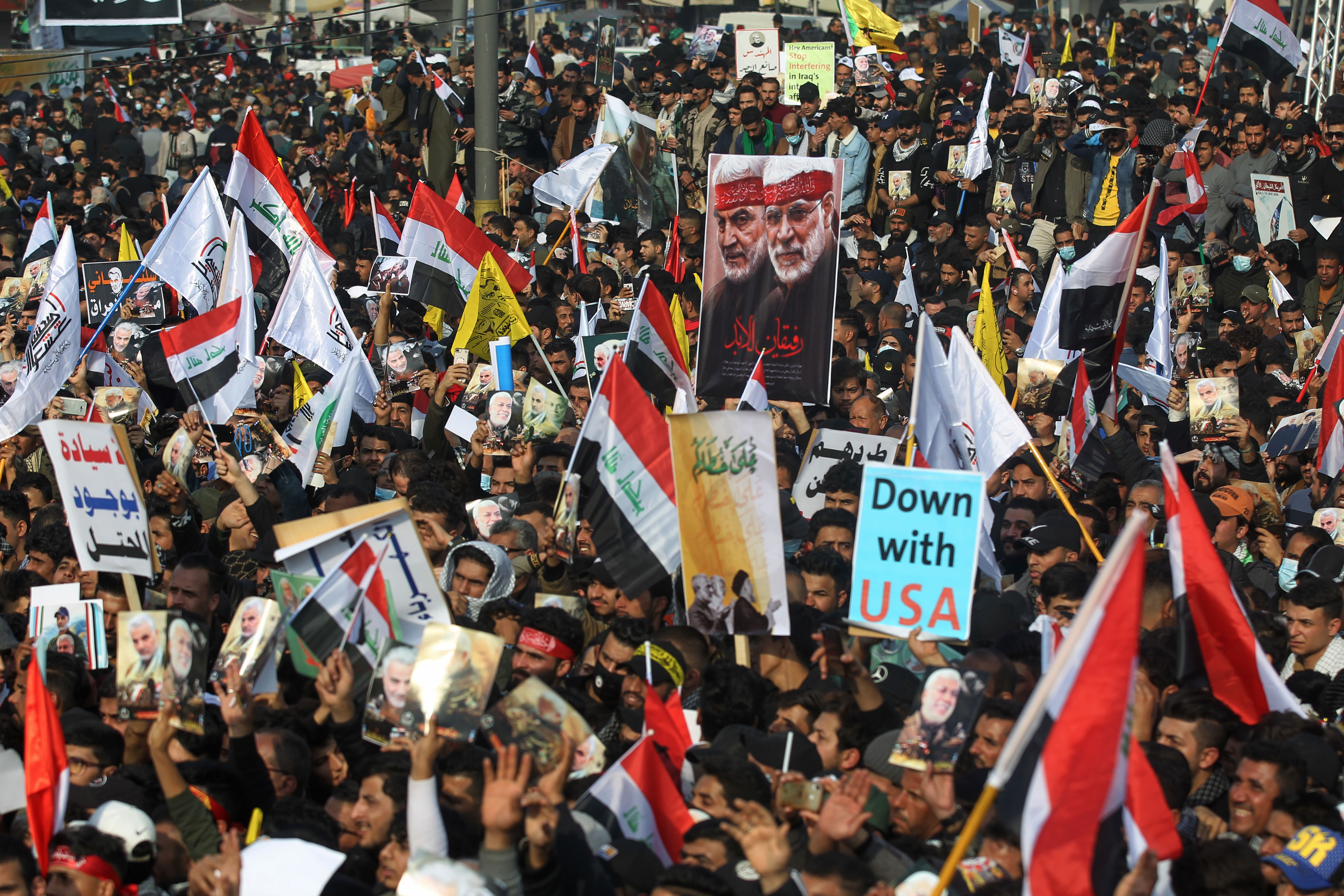 Iraqi demonstrators lift flags and placards as they rally in Tahrir square in the capital Baghdad on January 3, 2021, to mark one year after a US drone strike killed Iran's revered commander Qasem Soleimani and his Iraqi lieutenant Abu Mahdi al-Muhandis near the capital. (Photo: AFP)

TEHRAN - Iran on Sunday marked the one-year anniversary of the assassination of Qassem Soleimani, former commander of the Quds Force of the Islamic Revolution Guards Corps (IRGC), amid new waves of tensions with the United States.

US President Donald Trump ordered a strike on Soleimani's convoy near the Iraqi capital of Baghdad on Jan 3, 2020. The drone attack killed Soleimani along with an Iraqi militia commander.

In the run-up to the anniversary of Soleimani's death, Iran has dialed up the rhetoric of revenge against the United States. Over the past weeks, senior Iranian officials reiterated vows to punish perpetrators of Soleimani's assassination and expanded the list of US suspects to 48 names.

"By committing a cowardly terrorist act against General Soleimani, the United States violated international law and the United Nations' Charter in clear violation of Iraq's sovereignty," the Iranian Foreign Ministry wrote in its Twitter account on Friday.

"Iran will not give up until the authorities bring this action to justice," it added.

On Friday, the incumbent Commander of the Quds Force of the IRGC, Brigadier General Esmail Qa'ani, praised his predecessor as a hero of the Islamic nations. He also warned the United States that someone "from inside your own house" will retaliate for "your crime."

On the US side, tensions have also been ratcheted up over fears that Iran might strike its regional targets. Nearly one month ago, the United States sent a nuclear submarine and warships to the neighborhood of Iran's southern waters and flew its strategic B-52 bombers over the Gulf in a show "to deter Iran from attacking American or its allied targets in the Middle East."

On Thursday, Iran's Deputy Representative to the United Nations Es'haq Al-e Habib urged the UN Security Council to prevent the United States from what it called new "military adventurism" in the Gulf and the Sea of Oman. Iran stressed that it did not want conflict but would defend itself under any circumstances.

The faceoff between Iran and the United States was even further tightened as Iran told the UN's nuclear watchdog on Friday that it decided to "produce enriched uranium with 20 percent purity," which had been banned by the 2015 international nuclear agreement known as the Joint Comprehensive Plan of Action (JCPOA).

The move follows a stream of actions taken by Tehran over the past two years to scale down its commitments pertaining to the deal after the Trump administration withdrew from the deal in May 2018.

Iranian officials have argued that the US unilateral exit and its re-imposition of sanctions against Tehran have forced Iran to reduce its nuclear commitments.

As the US president-elect Joe Biden will be inaugurated on Jan 20, the Iranian side is cautiously optimistic.

With the coming of Biden to the office, negotiations over the thorny issues with Washington may begin, Sadeq Zibakalam, a professor of political science of Tehran University, told Iranian media in an interview recently.

However, Zibakalam said he did not believe that the relationship between Iran and the United States will change its main tone.

Biden has pledged to ease US pressures against Tehran and to return to the Iran nuclear deal in an attempt to engage the latter in the negotiations over controversial issues around the JCPOA. Iranian officials repeatedly stressed that they will not negotiate over the JCPOA.

Zibakalam believes that "the conflictual issues concerning Iran-US relations will not change."

The thorny issues in the bilateral relations, which started four decades ago after the establishment of the Islamic republic, will continue, he added.