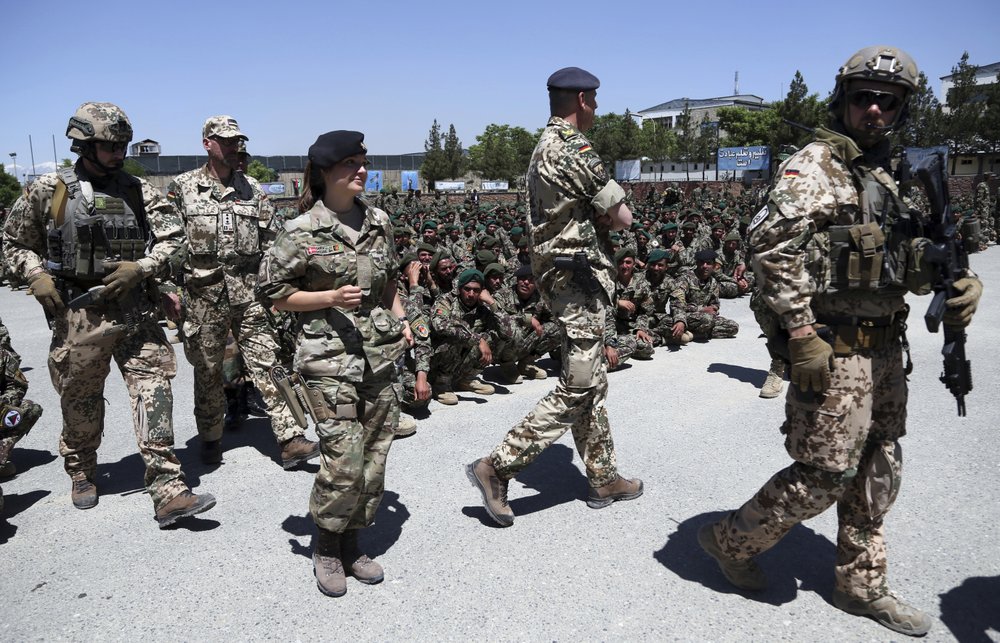 In this Monday, May 27, 2019 file photo, NATO forces attend the graduation ceremony of Afghan National Army soldiers from a 3-month training program at the Afghan Military Academy in Kabul, Afghanistan. (Photo: AP)

A warning by Iran’s president that European forces in the Middle East could be at risk if their nations join the US pressure campaign against the Islamic Republic puts a focus on thousands of foreign troops in the region.

Britain, France, and Germany have spent months trying to preserve the 2015 nuclear deal after President Donald Trump unilaterally abandoned it in 2018. But on Tuesday, the European Union initiated a dispute resolution mechanism to try to bring Iran back into compliance after Tehran began openly breaching some restrictions last summer.

Iran says it should not be bound to the agreement since the US reimposed crippling sanctions. After a US airstrike in Iraq killed Tehran’s top general, Iran responded by firing ballistic missiles at US troops stationed there. No one was hurt in the missile attacks.

“Today, the American soldier is in danger, tomorrow the European soldier could be in danger,” President Hassan Rouhani said at a Cabinet meeting without elaborating.

European countries have troops in Afghanistan, Iraq and elsewhere in the Middle East, where they mainly operate alongside much larger US deployments. Iran is allied with powerful armed groups in Iraq, Syria, Lebanon and Yemen.

A look at Europe’s military presence:

Britain, France and Germany are all part of the US-led coalition that is fighting the Islamic State group. Britain has about 400 troops based in Iraq while Germany has nearly 450 troops deployed to counter IS and to train Iraqi forces. Germany “temporarily” withdrew 35 of its troops from Iraq after Iranian Gen. Qassem Soleimani was killed on Jan. 3 in the US drone strike. Most were flown to Jordan, where Germany also has troops involved in reconnaissance and refueling flights for the anti-IS coalition. France has about 1,000 troops in the region to help combat IS in Iraq and Syria.

The European Union as a bloc has several dozen personnel in Baghdad working on security sector reform and advising the Interior Ministry. European Commission spokesman Peter Stano said officials are aware of the threats, but that “we, as the EU, are not leaving Iraq.”

Britain operates a naval base in Bahrain that can house up to 500 British military personnel and is focused on maritime security. It also has a joint training base in Oman. France has a naval base known as Camp Peace in Abu Dhabi’s Port Zayed, which houses some 700 French troops. Britain and France also station troops at US bases in the region.

The NATO mission in Afghanistan consists of about 17,000 troops from 39 allied and partner countries. The alliance formally concluded its combat mission at the end of 2014 and provides advice and training to Afghan forces. Britain has nearly 1,000 troops in Afghanistan and Germany has about 1,100.

Several European countries contribute forces to the UN peacekeeping mission in southern Lebanon, which patrols the tense frontier between Israel and the Iran-backed Hezbollah militant group. France contributes about 700 troops. Germany provides more than 100 forces to the peacekeepers’ maritime mission.