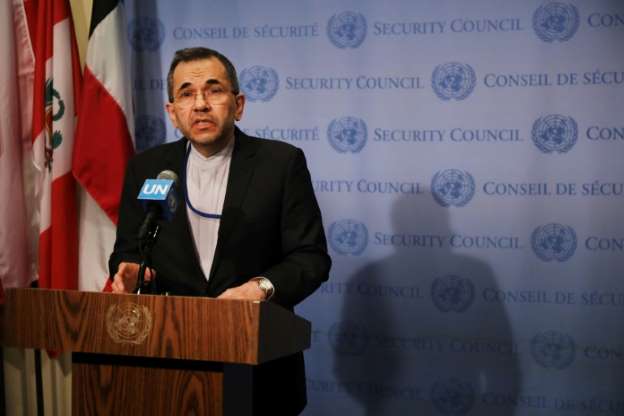 "The US withdrawal from the JCPOA (commonly known as the Iran nuclear deal) and re-imposition of its sanctions rendered the JCPOA almost fully ineffective, with respect to Iran's benefits, which is of course a clear violation of the US commitments under the JCPOA and a breach of its obligations under Resolution 2231," Iran's ambassador to the United Nations Majid Takht Ravanchi told the UN Security Council's semi-annual briefing on the implementation of Resolution 2231.

"The US also brazenly continues threatening other states to 'either violate Resolution 2231 or face punishment.' This irresponsible conduct by a Council's permanent member, unprecedented in the history of this body, is a frontal assault on Resolution 2231, violates the UN Charter and international law and further erodes the trust and confidence in the Council," said the ambassador.

"As a result, the US itself is not fulfilling its obligations under Resolution 2231, is not allowing Iran to implement certain parts of the JCPOA and is preventing other states from implementing their obligations under the resolution," he noted.

"Nevertheless, in the span of one year after the US withdrawal, the only reaction of Iran was to give more opportunity, weeks after weeks and months after months, to remaining JCPOA participants, mainly the E3 (Britain, France and Germany), upon their request, to compensate for the consequences of the US withdrawal," the envoy said.

The ambassador complained that Iran's good will and maximum restraint as well as repeated promises of other participants for taking practical solutions "yielded no concrete result."

In exercising its strategic patience policy in order to preserve the JCPOA, Iran however has paid "a heavy price" as a result of the US economic war and its so-called "maximum pressure policy," including the US attempts to cut Iran's oil exports to zero and disrupting free trade with Iran, he said.

"A multilateral agreement cannot be implemented unilaterally. Iran has done a lot and much more than its fair share to preserve the nuclear deal. Iran alone cannot, shall not and will not take all of the burdens anymore to preserve the JCPOA," he continued.

Therefore, in order to protect the security and national interests of the people of Iran and to bring a balance to the JCPOA, on May 8, Iran decided to limit, in phase one of its plan, the implementation of its commitments in two cases, namely the level of reserves of "enriched uranium" and "heavy water" as identified in the JCPOA, said Ravanchi.

On May 8, Iran issued a 60-day ultimatum to the remaining parties to the JCPOA (China, France, Germany, Russia, Britain, and the EU) to provide Iran with sanctions relief on its oil and financial sectors, failing which it would resume uranium enrichment activities and construction of the Arak nuclear reactor, which would constitute a direct violation of the JCPOA.

This was Iran's response to the US decision to end waivers granting eight countries permission to procure Iran's oil exports, despite previously imposed US sanctions.