Iranian oil tanker leaves Gibraltar despite US demand to seize it 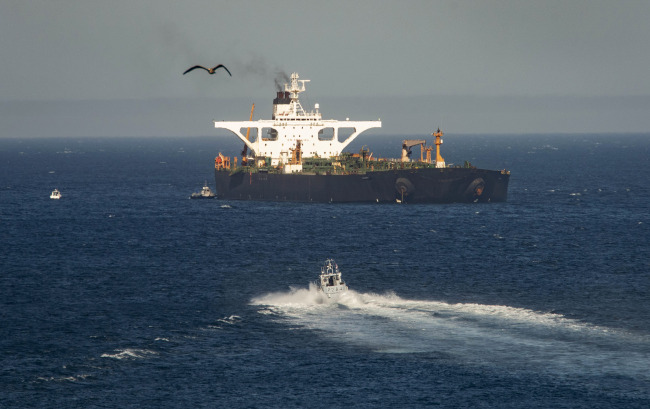 An Iranian oil tanker seized by Britain for weeks has left Gibraltar for international waters, and is reportedly heading for the Greek port of Kalamata, despite US demand to retain the vessel.

Tanker Grace 1, which was renamed by the Iranian authorities as Adrian Darya 1, was captured by British Royal Marines in Gibraltar on July 4 for allegedly violating EU sanctions against Syria, a charge denied by Tehran.

Iranian Foreign Minister Mohammad Javad Zarif on Monday welcomed the end of the seizure of the tanker in Gibraltar.

Asked to comment on reports that the ship is going to Greece to offload its cargo, Zarif said Iran cannot be very transparent about the transport of its oil because of US sanctions.

US Secretary of State Mike Pompeo on Monday called the release of the tanker "unfortunate" in an interview with US Fox News.

Pompeo claimed that if Iran was successful in making profits by selling the oil from the tanker, Iran's elite forces will "have more money, more wealth, more resources to continue their terror campaign, to continue their assassination campaign in Europe."

On the same day, the Iranian Foreign Ministry warned the United States against new attempts to seize its tanker after it left Gibraltar for international waters.

"Any attempt to do this (seize the Iranian vessel) ... would be a threat to the free maritime shipping," Iranian Foreign Ministry Spokesman Abbas Mousavi said.

Iran has notified Washington, through the official means, that "if they make such a mistake (seizing Iranian oil tanker), they will face consequences," Mousavi said in his weekly press briefing.

Gibraltar's authorities and a court on Thursday ruled to release the tanker. Following the ruling, Washington issued a warrant for the re-seizure of the tanker.

On Sunday, Gibraltar set the oil tanker free despite the US demand, saying that they had received assurances that the tanker's cargo would not be taken to Syria, and "the EU sanctions regime on Iran is fundamentally different to that of the United States."

Greek authorities have not received notification that the oil tanker was heading to Kalamata port in southern Greece, Greek media reported on Monday.

Athens is following the case closely and until the vessel reaches Greek waters on Sunday, as estimated, if she will not change course, there is plenty of time for consultations, Greek newspaper Proto Thema cited sources from the Greek Shipping and Greek Foreign Affairs ministries to report.