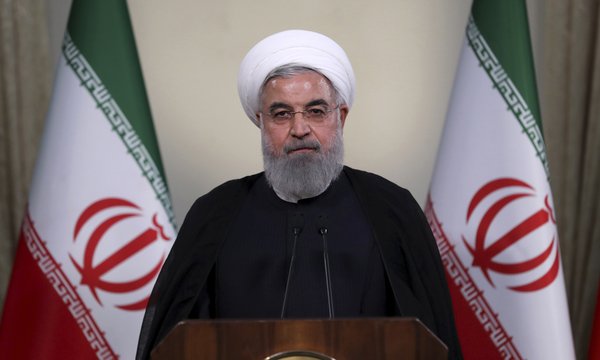 In this photo released by official website of the office of the Iranian Presidency, President Hassan Rouhani addresses the nation in a televised speech in Tehran, Iran, Tuesday, May 8, 2018. Iranian President Hassan Rouhani said Tuesday he'd send his foreign minister to negotiate with countries remaining in the nuclear deal after Donald Trump's decision to pull America from the deal, warning he otherwise would restart enriching uranium "in the next weeks." (Photo: AP)

"Mr. Rouhani is travelling to Iraq for the first time in his presidency, and we consider the trip a new start in our relations with Iraq," Zarif said.

During Rouhani's visit to Iraq, the areas of cooperation, including transit, oil, industrial work and the dredging of Arvand River, will top the agenda, he said.

"We plan to use the commonalities to advance the joint interests of both countries as well as those of the region," Zarif noted.

During his trip to Iraq, a high-ranking politico-economic delegation will accompany Rouhani.

It will be Rouhani's first official visit to Iraq during his tenure, after the United States imposed sanctions against the Islamic republic last year.