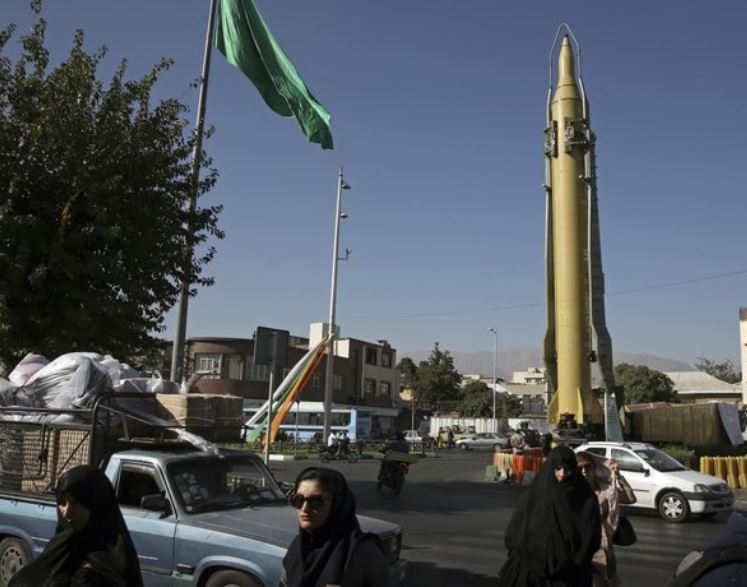 Iranians walk past a Ghadr-F missile displayed at a Revolutionary Guard hardware exhibition, marking 36th anniversary of the outset of Iran-Iraq war, at Baharestan Sq. in downtown Tehran, Iran in 2016. (File photo: AP)

TEHRAN, July 3 (Xinhua) -- Iranian President Hassan Rouhani said here Wednesday that the Islamic republic will abandon more of its nuclear commitments in the coming days if the parties to the Iranian 2015 international nuclear deal fail to observe their commitments.

Iran will increase the percentage of its enriched uranium to higher purity from July 7 on, Rouhani was quoted as saying by Tasnim news agency.

"As of July 7, our uranium enrichment will not be limited to 3.67 percent of purity," he said. "We will increase it based on our needs."

After one year of US unilateral exit from the Iranian landmark nuclear deal, Iran withdrew from implementing part of the nuclear deal on May 8 and threatened to take more actions in case Tehran's interests under the pact cannot be guaranteed. At that time, Iran set a 60-day deadline for the Europeans to help the Islamic republic reap the economic benefits of the deal.

Rouhani, who was talking in a cabinet meeting on Wednesday, also said that Iran's Arak heavy water nuclear reactor, which was agreed to be redesigned under the 2015 nuclear agreement, will resume its previous activities after July 7 if the other signatories to the deal fail to uphold their end of the deal, according to Press TV.

Under the Iranian nuclear deal, also known as the Joint Comprehensive Plan of Action (JCPOA), Iran agreed to redesign the 40-megawatt Arak research reactor to cut its potential output of plutonium.

Rouhani said Iran's imminent move concerning the Arak reactor could only be reversed "if they (the other signatories) act on all of their commitments concerning the facility."

Moreover, the Iranian president slammed the EU-designed payment channel as an "empty" mechanism.

"Empty Instrument in Support of Trade Exchanges (INSTEX) is of no use to us ... it is void and nothing is in it" to protect Iran's interests under the 2015 nuclear deal, he said.

However, if the INSTEX becomes operational and supplies Iran with petrodollars, it will be acceptable for Iran despite its shortcomings, he added.

The INSTEX, EU's special payment channel with Iran, was announced by the EU in January to secure trade with Iran and skirt US anti-Iran sanctions after Washington pulled out of the 2015 landmark Iranian nuclear deal in May 2018.

Iran has been cynical to the EU's "seriousness" and feasibility of the mechanism and has threatened that it will no longer wait for the Europeans under the US pressures.

On Monday, Iran's Foreign Minister, Mohammad Javad Zarif, said that Iran's low-grade enriched uranium stockpile has exceeded 300 kg for the first time since Iran reached an agreement with the world powers in 2015 to curtail its mass product.

Zarif also blamed the European signatories of the Iranian nuclear deal for their "insufficient" measures to ensure Iran's benefit from the accord after the US exit in May 2018.

"European measures have not been enough and as Iran has announced, we will carry out the second phase of reducing commitments," Zarif noted.

On Wednesday, Secretary of Iran's Supreme National Security Council, Ali Shamkhani, also warned the European countries against what he called the risks of Europe's "inaction" concerning the US administration's unilateral policies, according to Tasnim.