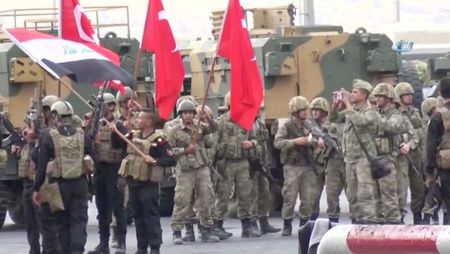 The Iraqi Joint Operations Command (JOC) on Wednesday accused the Kurdish military of reneging on draft of agreement with federal military to redeploy federal forces in disputed areas and border crossing points.
"The leadership of the (Kurdish) region and their negotiating delegation fully retreated on the draft agreed upon and negotiated by the federal team with them," the JOC said in a statement.
"It is clear that this is playing with time by them, and what they did after all those negotiations and agreements at the last minute is a return to start point, and contrary to all of what they agreed upon," the statement said.
The statement also accused the Kurds of moving their forces during the negotiated period and building new defensive lines to hamper the redeployment of the federal forces.
"Therefore, we can not tolerate this and it is our duty to protect the citizens and the forces," the JOC said, stressing the federal forces have strict instructions to prevent bloodshed, but if the armed groups associated with Erbil (Peshmerga forces) fire at the federal forces, "they will be chased under the supremacy of the federal law and will not find safe haven."