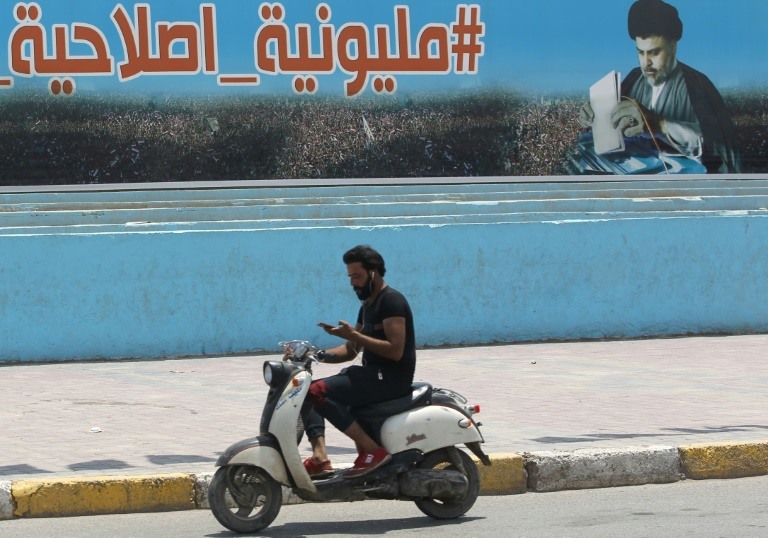 A man rides his scooter past a poster of Shiite cleric Moqtada Sadr in Sadr City, east of the Iraqi capital, on May 14, 2018. (Photo: AFP)

Populist Shiite cleric Moqtada Sadr on Tuesday eyed a governing coalition after dealing a blow to both Iranian and US influence with a shock election triumph that upended Iraqi politics.

With the last ballots still being counted, however, Tehran and its local allies already appeared to be making a rival push to block the fiery preacher's route to power.

Near complete results showed Sadr scooping the most seats in parliament after his Marching Towards Reform alliance with Iraq's communists tapped popular anger over corruption and foreign meddling.

Rivals called to congratulate him on the victory, his office said, after Iraqis went to the poll Saturday for the country's first election since the defeat of the Islamic State group.

The vote -- which saw record high abstentions -- was a slap in the face to the widely reviled elite that has dominated Iraq since the 2003 US-led invasion that ousted Saddam Hussein.

Sadr, who has ruled himself out of becoming prime minister, is looking to be the kingmaker and to cobble together a technocrat government from a dozen parties.

But with his alliance falling short of a majority, it will take lengthy wrangling to forge a coalition.

Abadi -- a consensus figure favoured by the US -- had been seen as likely frontrunner after declaring victory over the jihadists five months ago.

Sadr rose to prominence in the wake of the US invasion, when his militia fought a bloody insurgency against American troops.

After years on the sidelines, he has reinvented himself as a champion of the poor and linked up with secularists to battle corruption.

He is one of the few Iraqi politicians opposed to both the presence of American troops and the heavy influence that neighbouring Iran exercises over Iraq.

Supporters in the cleric's impoverished Baghdad stronghold of Sadr City -- named after his late ayatollah father -- remain hopeful that his victory could spell improvements.

"If we want to change things then the prime minister needs to come from Marching Towards Reform," said resident Salah Jamal, 24.

"We have tried all the others," Jamal insisted. "But we have had no results."

The protracted horse-trading ahead comes at a time of high tensions after Washington's withdrawal from a landmark nuclear deal with Tehran and fears of a tug-of-war over Iraq.

While Sadr's victory has yet to be confirmed, Iran already appears to convening meetings to try to block him from forming a government. 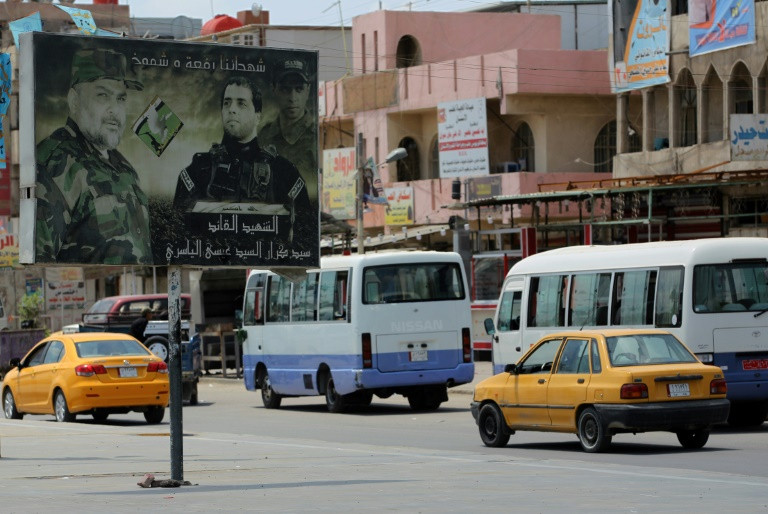 Traffic and an election poster on a road in Sadr City, the impoverished stronghold in northeast Baghdad of Iraqi cleric Moqtada Sadr. (Photo: AFP)

A participant said Qassem Suleimani, the foreign operations chief of Iran's elite Revolutionary Guards, was in Baghdad to try to broker a coalition among Sadr's Shiite rivals.

Suleimani has reportedly called for a union between Abadi's bloc, the Conquest Alliance of former anti-IS commander Ameri and former premier Nuri al-Maliki.

Abadi and Maliki are bitter rivals despite coming from the establishment Dawa party that has dominated politics in post-Saddam Iraq.

While speculation swirls, the next concrete step remains completing the vote count and firming up the final makeup of Iraq's new 329-seat parliament.

Recounts after disputes in Dohuk and Kirkuk provinces have delayed the final figures, but officials said a full tally should be announced by Friday.