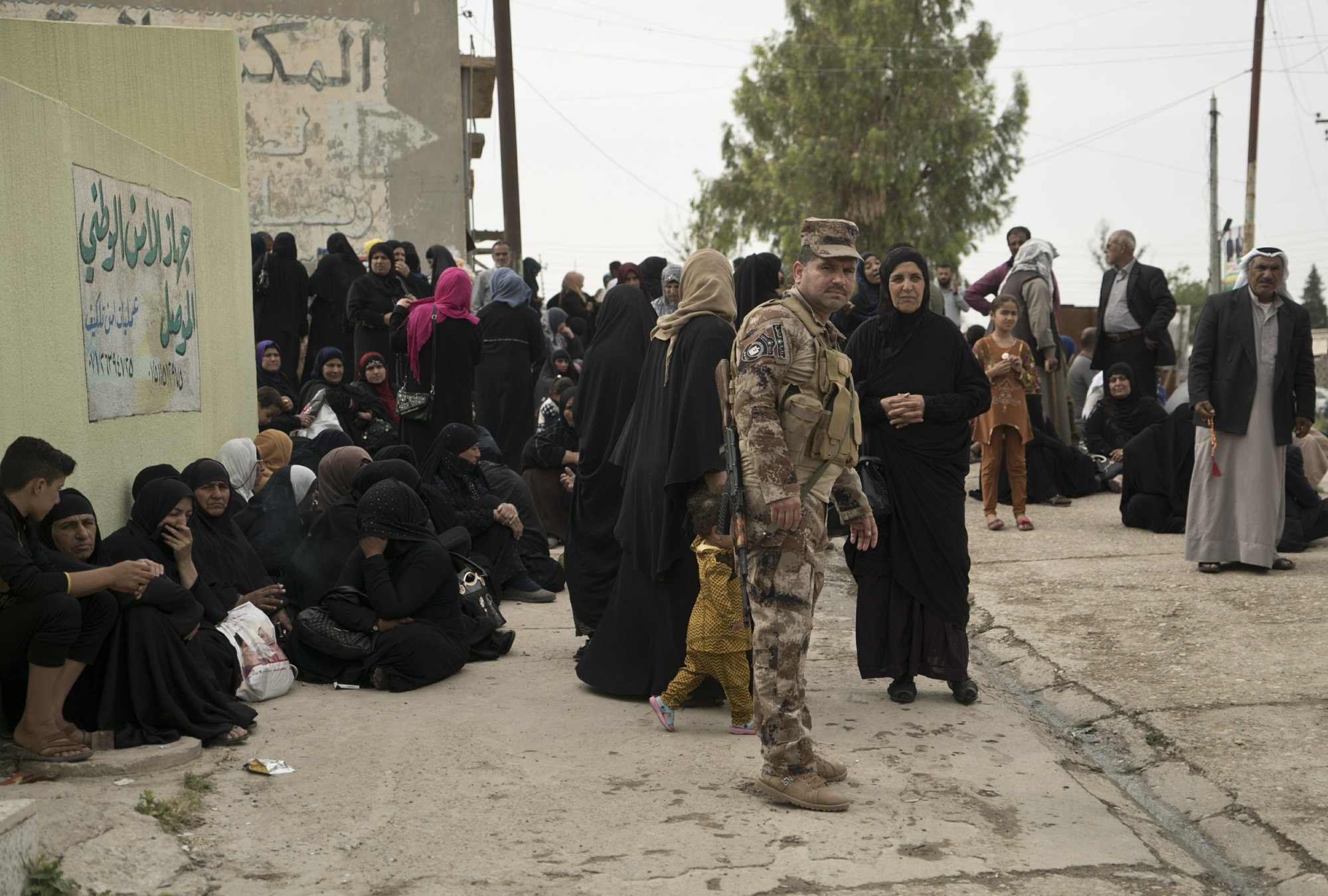 Relatives wait outside Nineveh Criminal Court, one of two counterterrorism courts in Iraq where suspected Islamic State militants and their associates are tried, in Tel Keif, Iraq April 26, 2018. (Photo: AP)

An Iraqi court on Tuesday sentenced two high-profile French members of the Islamic State group to death, including one who featured in a propaganda video praising the 2015 Paris attacks, bringing the total number of French former jihadis condemned to death this week to six.

France said it would do all it can to spare the group from execution in Iraq. Although it has made no effort to bring back the captured fighters, France is outspoken against the death penalty globally.

The sentencings in Iraq come amid controversy about the legal treatment of thousands of foreign fighters who had joined IS at the height of its power in Syria and Iraq when the militant group declared its self-styled caliphate. Human rights groups are concerned they are being rushed through Iraqi counterterrorism courts in trials that raise questions over whether justice is being done. Convictions are often based on confessions that defendants and rights groups say are extracted by intimidation, torture and abuse and without due process.

Although European IS members have been sentenced to death, none has actually been executed in Iraq.

The men sentenced to death Tuesday were identified as Karam Salam Mohammed El-Harchaoui and Brahim Ali Mansour Nejara. They are among a group of 12 French citizens who were detained by the US-backed Syrian Democratic Forces in neighboring Syria and handed over to Iraq in January. The Kurdish-led group spearheaded the fight against IS in Syria and has handed over to Iraq hundreds of suspected IS members in recent months.

Nejara, 32, helped run one of the networks that sent Europeans to join the Islamic State group and appeared in a video a week after the November 2015 attacks in Paris. The video was titled “Paris has collapsed” and shows a fictitious destruction of the Eiffel Tower, according to Jean-Charles Brisard of the Center of the Analysis of Terrorism.

Nejara is originally from a suburb of the French city of Lyon called Meyzieu, long known to be a training ground for jihadis, even before the appearance of the Islamic State group. He is believed to have encouraged one of his brothers back home to carry out an attack in France, possibly on the stadium there. Two brothers were arrested in France.

The video, in which he appeared armed and in military uniform praising the Paris attacks, was played in court Tuesday. The attacks killed 130 people and wounded more than 400.

Nejara, speaking before the judge, said that he was forced to make the video because the group was looking for someone who speaks French. He said he was threatened with prison when he requested to appear masked in the video, before they agreed to his request.

The other militant, El-Harchaoui, 33, lived in Belgium before he left for Syria in 2014. He was wounded in one of the battles he fought for IS in Syria. His second wife told The Associated Press he joined IS in Syria in 2014, was sent to Iraq to fight, escaped and traveled back to Syria’s Shaddadeh, then to Raqqa where he was wounded in an airstrike in 2016. He was jailed for fleeing, then released. The two then met and married in October 2015, after which he was arrested again.

“I know he will not have a fair trial,” Samira told the AP in an interview in March at camp Roj in northern Syria, where thousands of foreign women and children are languishing.

El-Harchaoui showed off his wound to the court on Tuesday, pulling off the top of his yellow prison uniform to reveal a hole in his right shoulder where he was wounded from a shell that hit a nearby house.

Three other French IS fighters had already been sentenced to deathon Sunday, and a fourth on Monday. Those convicted can appeal their sentences within a month. Nabil Boudi, lawyer for Leonardo Lopez, who was sentenced to death earlier this week, told France Info radio that lawyers for the French citizens were waiting for the end of all the trials before appealing.

Human rights groups have criticized Iraq’s handling of IS trials, accusing authorities of relying on circumstantial evidence and often extracting confessions under torture.

Judge Abdul Sattar Bayraqdar, a judicial spokesman, said Iraq is prosecuting these militants on behalf of all the countries of the world. “By punishing these criminals, we are saving the world from their evils,” he told AP.

The former IS members all said they regretted what they’d done. However, they all referred to IS by the Arabic name of “Tanzeem,” or organization, rather than Daesh, even when the judge did. The Arabic acronym for the group is deemed offensive by IS and its supporters.

France’s foreign minister said earlier Tuesday that his government is working to spare the group of condemned Frenchmen from execution after Iraq sentenced them to death.

Foreign Minister Jean-Yves Le Drian also reiterated France’s position but said the IS militants should be tried where they committed their crimes.

“We are multiplying efforts to avoid the death penalty for these ... French people,” he said on France-Inter radio. He didn’t elaborate, but said he spoke to Iraq’s president about the case.

Boudi, the lawyer, accused France of engaging in “doublespeak.” He said France knew full well the moment the French citizens were transferred to Iraq that they were going to be sentenced to death. He said the investigation lasted three months and was a judicial fiasco.

“The idea of a fair trial is a farce, a huge joke.”