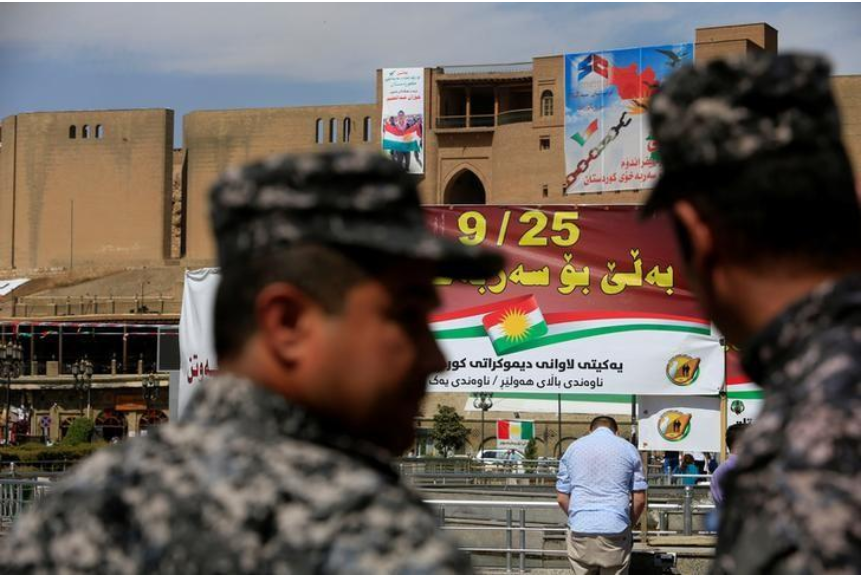 Kurdish policemen look on towards banners supporting the referendum for independence of Kurdistan in Erbil, Iraq September 24, 2017. REUTERS/Alaa Al-Marjani

Iraq’s Supreme Federal Court ruled on Monday a Sept. 25 Kurdish independence referendum was unconstitutional and the results void, strengthening Baghdad’s hand in a stand-off with the Kurdish region watched closely by neighboring Turkey and Iran.

The Kurdistan Regional Government did not directly say whether it accepted the effective cancellation of the vote, but its new prime minister called for a third party to oversee talks between Iraq’s central government and the Kurds.

The KRG also called on the international community -- including the United Nations, European Union and non-governmental organizations -- to intervene and help lift what it called “restrictive” sanctions imposed by Baghdad in retaliation for the referendum.

Kurds voted overwhelmingly to break away from Iraq in the referendum, defying the central government in Baghdad and alarming neighboring Turkey and Iran who have their own Kurdish minorities.

“The Federal Court issued the decision to consider the Kurdish region’s referendum unconstitutional and this ruling is final,” a court spokesman said. “The power of this ruling should now cancel all the results of the referendum.”

The court is responsible for settling disputes between Iraq’s central government and its regions, including Kurdistan. The verdict is not subject to appeal.

A statement from Iraq’s Prime Minister Haider al-Abadi said: “We call upon everybody to ... avoid taking any step which violates the constitution and law.”

The court had ruled on Nov. 6 that no region or province can secede. The Kurdistan Regional Government (KRG) said last week it would respect that verdict, signaling a new phase in efforts to restart negotiations over the region’s future.

The Iraqi government responded to the Kurdish independence referendum by seizing the Kurdish-held city of Kirkuk and other territory disputed between the Kurds and the central government. It also banned direct flights to Kurdistan and demanded control over border crossings.

Long-serving Kurdish president Masoud Barzani stepped down over the affair and the regional government led by his nephew Prime Minister Nechirvan Barzani has tried to negotiate an end to the confrontation.

In a news conference following Monday’s ruling, Nechirvan Barzani said the court’s ruling was reached unilaterally, without input from KRG representatives, and called for a third party to oversee negotiations between Baghdad and the Kurds.

“The rights of Kurds are enshrined in the (Iraqi) constitution and we seek the implementation of this constitution to resolve our issues with Baghdad,” Barzani told reporters, according to Kurdish Rudaw TV.

“The constitution is one package and must be applied in its entirety, not selectively.”

However, Barzani did not directly say whether Kurdish officials accepted the effective cancellation of the referendum. The KRG had previously offered only to freeze the results.

The KRG later said its chief concern was the lifting of an embargo on international flights to the region, which it said hampered foreign investment as well as humanitarian efforts for the more than 1.5 million internally displaced people currently in the region.

“We call on the international community to intercede in urging Baghdad authorities to lift the embargo, without condition, on international flights.”

“The restrictive policies adopted by Baghdad against Erbil are in violation of Iraq’s obligations and responsibilities under international and humanitarian law,” the KRG said in a statement.