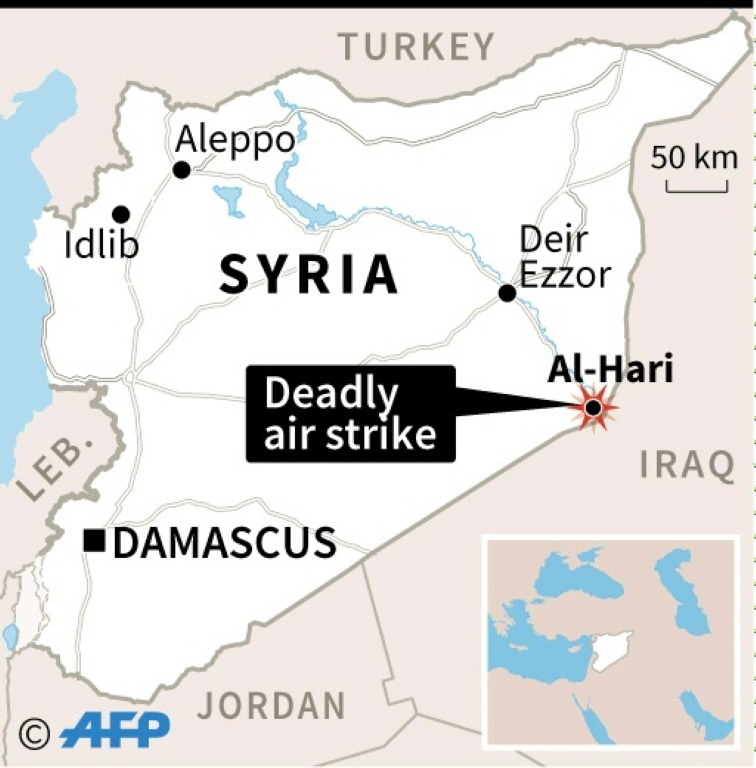 An Iraqi paramilitary force key to the battle against the Islamic State group on Monday accused the US-led coalition of killing more than 20 of its fighters in an air raid in eastern Syria.

Both Syrian authorities and Iraqi forces pointed the finger at the US-led coalition, which denied it was involved in Sunday night's attack.

The raid slammed into a regime-controlled position in the border town and left at least 52 fighters dead, according to a Britain-based monitor.

Among them were fighters from Iraq's powerful Hashed al-Shaabi military alliance, some of whom have crossed into Syria to fight against IS.

"US planes fired two guided missiles at a fixed position of Hashed al-Shaabi units on the border with Syria, killing 22 fighters and wounding 12," the Iran-backed Hashed said.

The bodies of three Iraqi fighters killed in the raid were returned on Monday to their hometowns for burial, said AFP's correspondent in the southern Iraqi city of Nasiriyah.

The Syrian Observatory for Human Rights said a total of 30 Iraqi forces were among the dead in Al-Hari, as well as 16 Syrian forces and six unidentified fighters.

The attack was first reported overnight by Syrian state media, which cited a military source accusing the coalition of bombing one of its positions in Al-Hari.

It said several people were killed and wounded but did not give a specific number or their nationalities.

The coalition's press office said it had received reports of a strike in the area that had killed and wounded Iraqi fighters, but denied it was involved.

"There have been no strikes by US or coalition forces in that area," it told AFP by email.

Syria's army has been gutted by the country's seven-year conflict and has relied heavily on reinforcements from local militias and from regional allies.

Those groups have played a key role in the fight against IS, helping Syrian government forces recapture swathes of the country that the jihadist group had overrun in 2014.

Hashed was vital to the fight against IS in Iraq, but has also battled the jihadists across the border in their eastern Syria bastions.

Separate offensives have since whittled down IS territory in Syria to just a handful of pockets in the eastern desert, including in Deir Ezzor province.

A US-backed alliance of Kurdish and Arab fighters and Russia-supported regime forces are carrying out separate operations against those IS-held pockets.

The two forces have mostly avoided each other thanks to a de-confliction line that runs across the province along the winding Euphrates River.

Syrian troops are battling IS on the western river bank, while the US-backed Syrian Democratic Forces fight on the east. Iraqi warplanes also have occasionally bombed IS positions in eastern Syria.

Al-Hari lies on the western side, close to the river and the de-confliction line.

The buffer has largely been successful in keeping the two offensives apart, but there have been exceptions.

The deadliest incident was in February, when US-led coalition air strikes killed at least 100 pro-regime fighters in Deir Ezzor province, including Russians.

Syria's conflict began in 2011 with protests against Assad, but then spiralled into a full-blown war that has drawn in world powers and given rise of jihadists like IS.

The strike on Al-Hari came a day after the US-backed SDF announced it had ousted IS from Dashisha, a village to the north in Syria's Hasakeh province.

The village had been one of the last IS-controlled areas in a corridor linking Syria with Iraq.

"For the first time in four years, Dashisha, a notorious transit town for weapons, fighters and suicide bombers between Iraq and Syria, is no longer controlled by ISIS (IS) terrorists," Brett McGurk, the US president's special envoy for the war against IS, said on Monday.