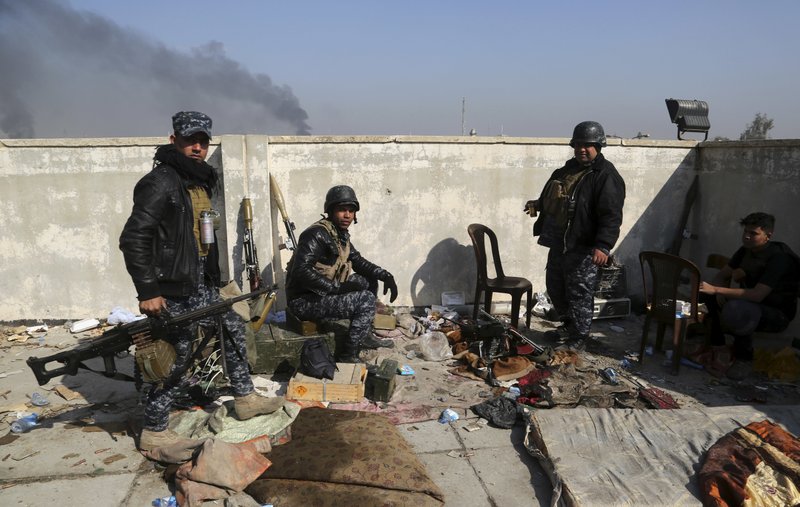 Soldiers take combat positions as Iraqi security forces advance during fighting against Islamic State militants in western Mosul, Iraq, March 7, 2017. A senior coalition official says the remaining western Mosul neighborhoods held by the Islamic State group are now completely surrounded and IS has lost more than 60 percent of the territory the militants once held in Iraq. (Photo: AP)

A joint force from Anbar's Operations Command and the intelligence service conducted a search operation in the area of Wadi al-Qadhif in south of the town of al-Rutba, some 400 km west of the Iraqi capital Baghdad, said a statement by the Joint Operations Command.

Another force from Anbar's Operations Command carried out a search operation in the area of al-Saggar, east of the town of al-Qaim near the border with Syria, the statement said.

The troops discovered seven IS hideouts and a cave containing four IEDs, anti-tank land mines and various explosive devices and supplies, the statement said, adding that the troops seized the ammunition and destroyed all the hideouts and the cave.

The security situation in Iraq has dramatically improved after Iraqi security forces fully defeated the extremist IS militants across the country in late 2017.

IS remnants, however, have since melted into urban areas or resorted to the deserts and rugged areas as safe havens, carrying out frequent hit-and-run attacks against security forces and civilians.