Allawi said in a recent interview with al-Furat local TV channel that China's help will not be forgotten by himself or the Iraqi health sector.

The minister's comment came as China is supporting the Iraqi authorities in facing the COVID-19, at a time when Iraq is suffering from weak health system after years of conflicts and chaos following the U.S.-led invasion in 2003.

A Chinese team of seven experts has been working with their Iraqi counterparts since March 7 in the country.

On March 25, a new PCR (polymerase chain reaction) lab built by the Chinese experts, based on Chinese donation of nucleic acid test kits and other equipment, was inaugurated in the capital Baghdad.

The lab, which has the ability to conduct more than 1,000 tests per day, will increase the urgently needed nucleic acid detection capacity to detect COVID-19 cases in the war-torn country. 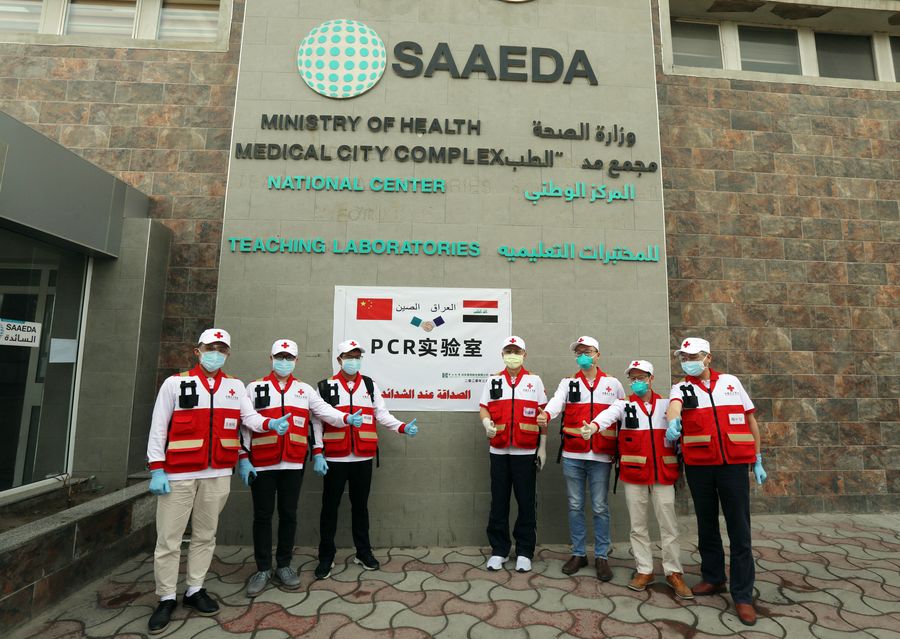 A Chinese team of health experts sent to provide assistance to contain the COVID-19 outbreak in Iraq pose for a group photo outside the new PCR laboratory in Baghdad, Iraq, March 25, 2020. (File photo: Xinhua)

Allawi said that the Chinese team of experts also helped the Iraqi side to form a committee of experts from the Iraqi physicians who had experience in treating the bird flu epidemic which appeared in Iraq in 2014.

He said that the Chinese assistance also included advanced medical screening equipment such as mobile X-ray and CT, which are accurate in detecting coronavirus.

"They provided us with a very advanced communication device, presented by Huawei, and through this device, the Chinese experts will train our cadres from Mosul (in northern Iraq) to Basra (in southern Iraq), where we will prepare a daily program for each province through the accurate cameras in this device," the minister said.

Allawi confirmed that the potentials of the Iraqi health ministry currently is in good condition, thanks to the assistance from China.

Meanwhile, the Iraqi government has taken several measures recently, including extending a nationwide curfew until April 11.