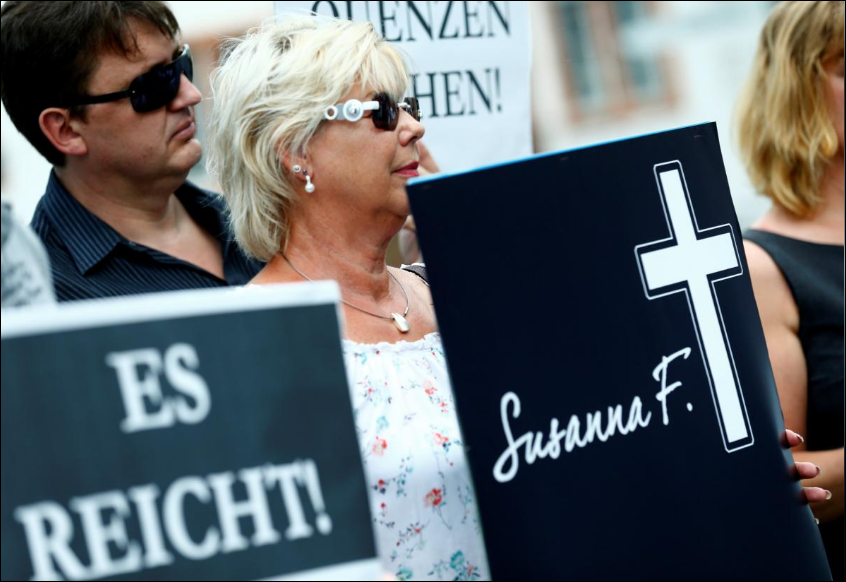 People follow a demonstration called out by the Anti-immigration party Alternative for Germany (AfD) in Mainz, Germany, June 9, 2018, after a 20-year-old Iraqi man had admitted to the rape and murder of Susanna F., a 14-year-old German girl. (Photo: Reuters)

Police in the Kurdistan region of Iraq said on Saturday that a 20-year-old Iraqi man had admitted to the murder of 14-year-old Susanna Feldman in Germany, where the case has stoked the immigration debate.

The Jewish teenager from Mainz near Frankfurt was found dead on Wednesday in a wooded area in Wiesbaden, near a refugee center where the alleged attacker had lived, German police said.

An autopsy showed she had been the victim of a violent and sexual attack. Police said there was no evidence her religion had been a factor and the Central Council of Jews in Germany cautioned against attributing any anti-Semitic motive.

“Officers in Zakho (in Iraq’s semi-autonomous Kurdish region) called me and said they had located the suspect and would arrest him as soon as he comes to the city,” Dohuk city police chief Tariq Ahmed told Reuters.

“He had been staying at a hotel in Dohuk and after realizing the police were after him left for Zakho to stay at a relative’s house. He was asleep there at night and was arrested in that house at 5:30 (a.m.),” Ahmed said.

He said the suspect had confessed to killing the German teenager during interrogation by Kurdish security authorities.

“The girl was a friend of his. They went on a trip to the woods and there they consumed a lot of alcohol and drugs then got into a dispute and the girl tried to call the police,” Ahmed said. “The suspect became afraid because she was under 18 and he knew if the police came it would be a major charge.

Ahmed added: “He tried to convince her not to call the police but she insisted so he choked her and buried her beneath the dirt.”

German newspaper Wiesbadener Kurier reported that Bashar was expected to be extradited to Germany on Saturday. A spokesman for Germany’s federal police declined to comment on the report.

“We have strong ties with Germany, European countries and with Interpol regarding this case,” Ahmed said. “With regard to extraditing him to Germany, this depends on what the Kurdistan Regional Government (KRG) and the German government agree on.”

Chancellor Angela Merkel’s decision to take in large numbers of asylum seekers during Europe’s 2015 migrant crisis has stirred a political backlash, with many politicians calling for new rules to make it easier to deport immigrants.

Bashar had been living in Germany as a refugee since 2015, German media have reported.

German police set up a special call center for tips from the public and issued releases in Arabic and Turkish. They said on Thursday that Bashar had likely fled to Erbil in the KRG.