WORLD Iraqi monument destroyed by IS recreated in London

Iraqi monument destroyed by IS recreated in London 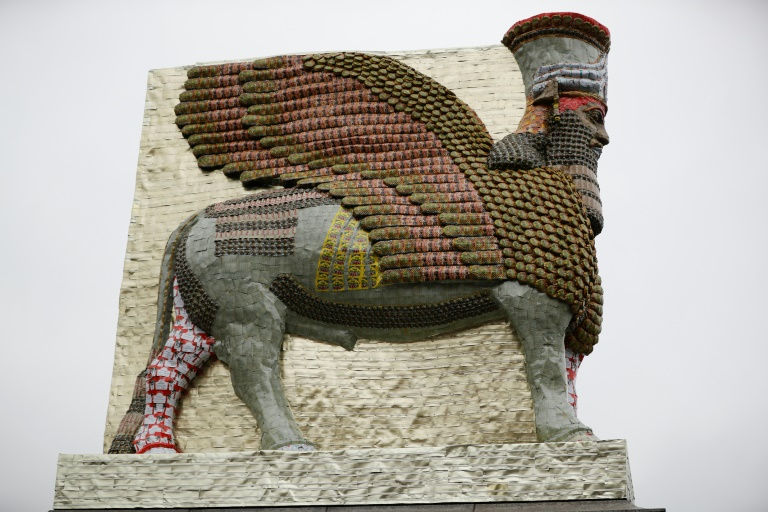 Created by US conceptual artist Michael Rakowitz, who is of Iraqi Jewish descent, the replica is entitled "The Invisible Enemy Should Not Exist" (Photo: AFP)

A reconstruction, made from date syrup cans, of an ancient Iraqi statue destroyed by Islamic State jihadists was unveiled in London's Trafalgar Square on Wednesday.

The artwork will stand for two years on the empty fourth plinth in the British capital's central square as a monument to the destruction of Iraqi culture since the 2003 US-led invasion.

Created by US conceptual artist Michael Rakowitz, who is of Iraqi Jewish descent, the replica is entitled "The Invisible Enemy Should Not Exist".

"I see this work as a ghost of the original and as a placeholder for those human lives that cannot be reconstructed, that are still searching for sanctuary," said Rakowitz.

It recreates a Lamassu -- a winged bull and protective deity -- that stood at the gates of Nineveh, northern Iraq, from around 700 BC. It was destroyed by the Islamic State (IS) group in 2015.

The new statue is part of a wider project to recreate more than 7,000 objects looted from the Iraq Museum in 2003 or destroyed at archaeological sites in the aftermath of the Iraq War.

London Mayor Sadiq Khan said the artwork was an "act of resistence" against Islamic extremists and philistines.

He claimed that 20 million people would walk past the statue during its two-year run, making it the world's most visible piece of contemporary art.

"It sends a message loud and clear: we will not be defied, scared or cowed, we will stay united," Khan told AFP.

"Your past defines the future. The idea that you can blow up statues and somehow rewrite history I find appalling."

The statue stands 4.5 metres high, weighs 6,000 kilogrammes and is made from 10,500 empty Iraqi date syrup cans, representing a once-renowned industry laid low by the wars in Iraq.

"The statue, for me, symbolises a lot of things," Rakowitz told AFP.

"It's about the dehumanisation of the Iraqi people and the loss that they incurred."

Rakowitz said dates were put into the mouths of newborn babies in Iraq so that their first taste of life was sweet.

Now the number of date palms has dwindled from 30 million in 2003 to around three million, he claimed, adding that Iraqi date syrup now gets packaged under the label of other countries.

"It's a foodstuff that suffers from the xenophobia of the West," the artist said.

"It speaks to a devastation that is not just cultural but also environmental."

Trafalgar Square has large stone plinths in each corner, three of which bear permanent statues. The fourth was never completed.

Since 1998 the empty plinth has been used to showcase temporary pieces of art, and has so far hosted works including a giant ship in a bottle and a huge nude statue of the English artist Alison Lapper, who was born without arms, during her pregnancy.