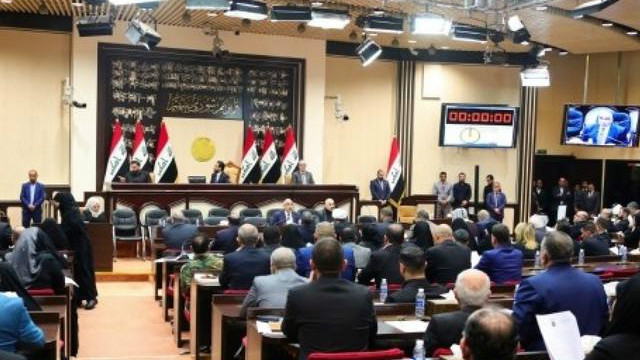 BAGHDAD, Jan. 6 (Xinhua) -- The Iraqi parliament on Sunday passed a draft law requiring the government to end the presence of foreign forces in Iraq and prevent them from using Iraqi airspace and water.

In an extraordinary session, Iraqi lawmakers voted with majority in favor of passing a law requiring the government to cancel the request for assistance from the international coalition to fight the Islamic State (IS) group due to the end of military operations and war in Iraq.

"The Iraqi government should work to end the presence of any foreign forces in the territories and prevent them from using the Iraqi airspace for any reason," said the parliament decision.

In addition, the Iraqi government should "file a complaint against the United States for its violations and grave breaches of Iraqi sovereignty and security."

Iraqi caretaker Prime Minister Adel Abdul Mahdi also attended the televised parliament session and addressed the lawmakers, saying "the departure of the U.S. forces from Iraq will be in the benefit of Iraq and the United States, especially after the latest developments."

After the airport attack, Abdul Mahdi called on parliament to hold an extraordinary session to fix the Iraqi official position and take necessary legislative decisions to preserve the dignity, security and sovereignty of Iraq.

The United States said later Sunday it was disappointed by the Iraqi parliament's decision to end the presence of all foreign troops in the country.

The U.S. State Department strongly urged "Iraqi leaders to reconsider the importance of the ongoing economic and security relationship between the two countries" in a statement.

Over 5,000 U.S. troops have been deployed in Iraq to support Iraqi forces in the battles against IS militants, mainly providing training and advising to the Iraqi forces.

"The region is in a dire need of calm not escalation, and of settling conflicts not igniting and sustaining them," said the AL statement.

"The developments in recent days show the size of foreign interventions in Arab affairs and their high political, security and economic costs," the AL statement said.

Also on Sunday, the Iraqi Foreign Ministry said it has filed a complaint against the U.S. government to the United Nations Security Council over U.S. airstrikes against the paramilitary Hashd Shaabi forces in western Iraq and near Baghdad International Airport.

It said that the U.S. attacks "constitute a serious violation of Iraqi sovereignty and violate the conditions for the presence of the American forces in Iraq."

In its latest move, Iran announced on Sunday that it is taking the final step to end its commitments to the landmark nuclear deal inked with the U.S. and other world powers in 2015, from which the United States withdrew in May 2018.

Turkish President Recep Tayyip Erdogan said on Sunday that the mounting tension in the Middle East should be controlled before it reaches a point where all parties will be harmed.

The Turkish leader said he would discuss the issue in detail with his Russian counterpart Vladimir Putin during his visit to Istanbul on Jan. 8.