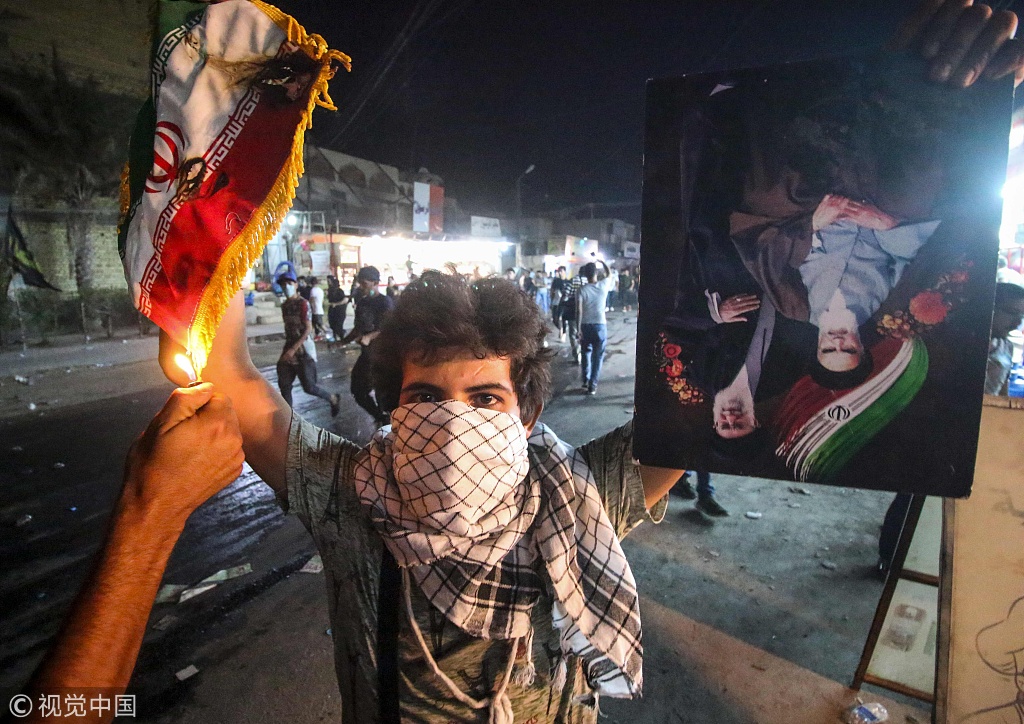 An Iraqi protester holds up an Iranian flag as another sets it on fire for him, next to a portrait depicting Iran's former and current Supreme Leaders Ayatollah Khomeini and Khamenei, during demonstrations against the government and the lack of basic services in Basra on Sept. 7, 2018. (Photo: VCG)

Iraqi Prime Minister Haider al-Abadi ordered Saturday an investigation of the security force responsible for protecting Iranian consulate in Basra after it was attacked by demonstrators protesting rampant unemployment and lack of public services.

A statement by Abadi's office said that the investigation is aimed to hold the security force accountable "for not fulfilling their duties in providing the necessary protection."

On Friday evening, dozens of protesters stormed the Iranian consulate in Iraq's southern city of Basra, setting fire to the building after the security forces guarding the consulate withdrew to avoid casualties, while the Iranian employees had withdrawn earlier from the building to safe places.

Abadi, who is also the commander-in-chief of the Iraqi forces, issued orders to the security forces "to deal firmly with the riots that accompanied the demonstrations and to protect the state and private institutions."

Also on Saturday, the Health Ministry said in a statement that the Friday protests resulted in the deaths of three people and the injuries of some 48 civilians and two policemen.

The demonstrators also tried to move toward the U.S. consulate in the city, but the attempt was unsuccessful because of upgraded security measures.

Jabbar al-Saidi, head of security committee of the provincial council, told reporters that many areas in Basra province are under control of the demonstrators, but reinforcement troops from Baghdad have arrived there to take control of the security situation in the province.

A security source in the city told Xinhua that commandos of Counter-Terrorism Service have been deployed on Saturday morning around banks and other government buildings in Basra and other towns of the province.

Basra, the province's capital city which bears the same name, has long witnessed complaints among its over 2 million residents about the collapsing infrastructure, power cuts and corruption.

Water supply in the province is also widely criticized for high salinity, with thousands of residents having been hospitalized.

The protesters also accused the influential political parties of being behind the widespread corruption, which led to high unemployment rate and failure in rehabilitation of the country's electricity, water and other basic services.