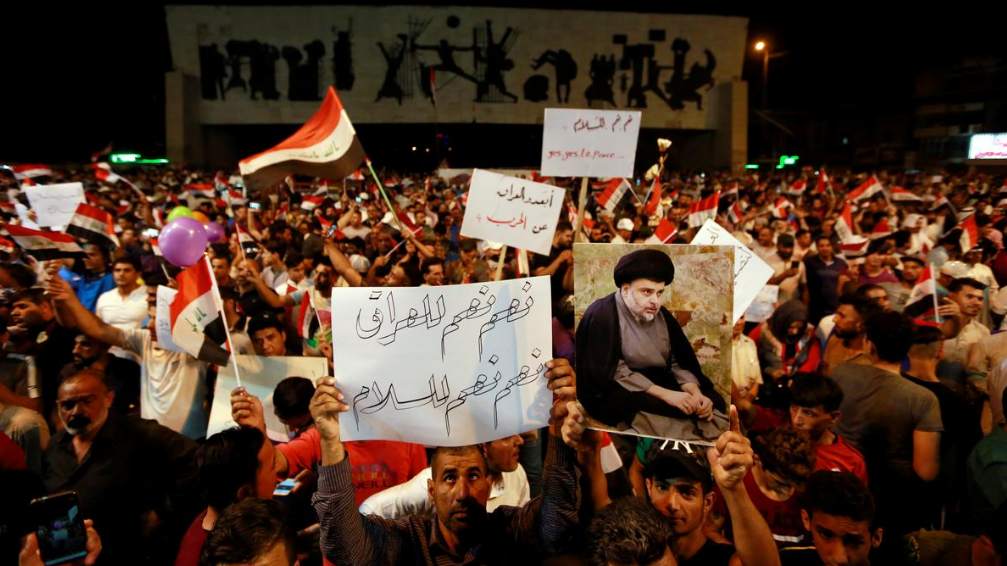 Thousands of supporters of Iraqi prominent Shiite cleric Moqtada al-Sadr rallied on Friday evening in the capital Baghdad and other Iraqi cities, urging political and factional leaders to stay out of any conflict between Baghdad's two biggest allies, Iran and the United States.

Sadr, whose political party, Sairoon Alliance, captured more parliamentary seats than any other party or alliance in Iraq's parliamentary elections last year after being sidelined for years, opposed to both US and Iranian influence in the country.

The demonstrators, rallying in Tahrir Square in downtown Baghdad, carried Iraqi flags, white flowers and balloons. Some released dozens of white doves representing peace while chanting "Yes, Yes to peace. No, No to war."

One of the banners called "No, no to war. Keep Iraq away from war and conflict."

Demonstrations also took place in the holy Shiite city of Karbala and the city of Diwaniyah in central and southern Iraq after the Shiite cleric called for rallies across Iraq.

'War would turn everything into rubble'

"I don't want a war between Iran and America and do not want Iraq to be a battlefield of such war. We need a serious stand from the leaders of the country in order to distance Iraq from such war which would turn everything to rubble," Sadr wrote on his Twitter page earlier.

Iraqis worry that their country will be caught up in any escalation of US-Iranian tensions, which spiked earlier this month when US President Donald Trump's administration said it had sent additional forces to the Middle East to counter alleged threats including from Iranian-backed militias in Iraq.

Politicians and Shiite paramilitary leaders have called for calm and the Iraqi government has tried to position itself as a mediator between the two sides.

"We've just recovered from Islamic State (ISIL). Iraq must not be used as a base to try to harm any country. America doesn't want Iraq to be stable," said protester Abu Ali Darraji.

A small incident could spark a war

The demonstrations came amid rising tensions between the US and Iran.

A rocket was fired last week into Baghdad's fortified Green Zone which houses government buildings and diplomatic missions, but caused no casualties. No group claimed responsibility, but US officials said they strongly suspect Iran's local allies.

The attack came after US Secretary of State Mike Pompeo warned Iraqi leaders that if they failed to keep in check powerful Iran-backed militias, Washington would respond with force.

On May 15, the US State Department also ordered the non-emergency US employees working in both the embassy in Baghdad and the consulate in Erbil to leave Iraq.

After pulling out of Iran's 2015 nuclear deal with world powers, Trump restored US sanctions on Iran last year and tightened them this month, ordering all countries to halt imports of Iranian oil or face sanctions themselves.

Both Iran and the US say they do not want war, but the US has increased its military buildup in the region recently by deploying an aircraft carrier, bombers and anti-missile systems.

Security officials and analysts warn that a small incident could spark a new spiral of violence in the volatile region.

Iraq has said it will send delegations to Washington and Tehran to help calm tensions.