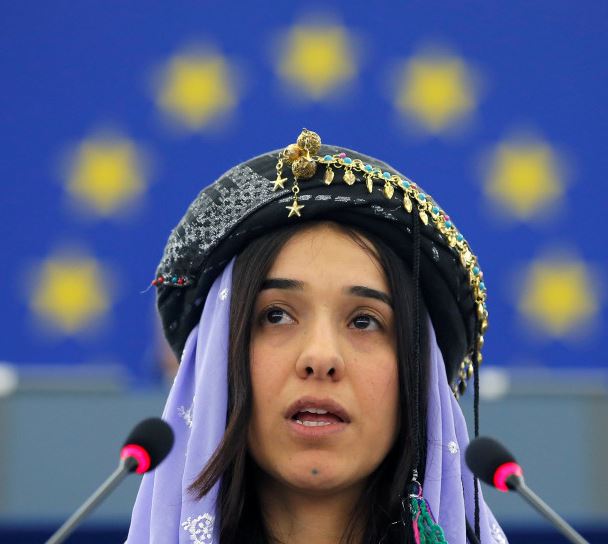 Nadia Murad adresses the European Parliament during an award ceremony for the 2016 Sakharov Prize at the EuropeParliament in Strasbourg, France, on Dec. 13, 2016. (File photo: Reuters)

BAGHDAD, Oct. 5 (Xinhua) -- Iraqi newly elected President Barham Salih and Parliament Speaker Mohammed al-Halbousi on Friday congratulated Nadia Murad, a Yazidi woman who was awarded the 2018 Nobel Peace Prize for her efforts against the use of sexual violence as a weapon of war.

"I spoke by telephone with dear Nadia Murad and congratulated her for her Nobel Peace Prize. Nadia's honor reflects the world's recognition of the tragedy of Yazidis and all victims of terrorism in Iraq," Salih said on his official Twitter account.

He hailed Murad's award as "an appreciation for her courage and persistence in defending the usurped rights," and "a tribute to the struggle and steadfastness of Iraqis in the face of terrorism and extremism."

Halbousi called the award "a real recognition to the sacrifices made and still making by Iraq on behalf of the world."

"Nadia Murad became an icon of patience, sacrifice and courage, and a symbol of rejection of injustice and tyranny," he said.

Earlier in the day, the Norwegian Nobel Institute in Oslo, announced Nadia Murad and Denis Mukwege as laureates of the 2018 Nobel Peace Prize.

Nadia Murad is a 25-year-old woman who advocates on behalf of her community and survivors of genocide.

She was born in the village of Kojo near the town of Sinjar, some 100 km west of Iraq's northern city of Mosul. Her family of the Yazidi ethno-religious minority were farmers.

Murad was among thousands of Yazidi women who were abducted in 2014 and enslaved by the self-styled Islamic State (IS) terrorist group. She had been repeatedly raped before escaping with the help of a family to safe areas outside the IS-controlled territory.

The Yazidi minority are primarily ethnic Kurds whose religion incorporates elements of many faiths. There are about 600,000 Yazidis in Iraq, about 80 percent of them living in the towns of Sinjar and Bashiqa in Iraq's northern province of Nineveh.