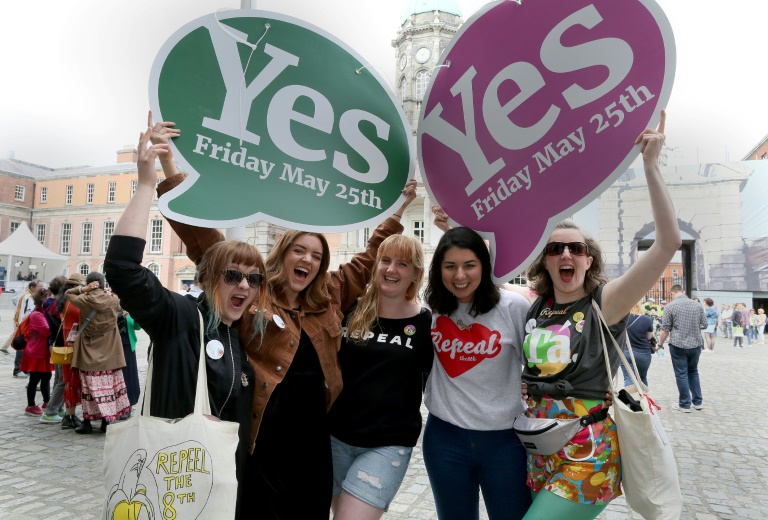 Pro-choice supporters of all ages cheered and cried with joy at counting centres in Dublin as preliminary results showed the proposal to repeal a constitutional ban on terminations winning by around a two-thirds majority.

With the votes counted in 30 of the 40 constituencies, 68 percent had voted in favour of overhauling the law, on a 65 percent turnout.

Dublin Central and Dun Laoghaire had the biggest Yes vote at 77 percent, while the highest No vote was 43 percent in Rosscommon-Galway.

"What we've seen today is the culmination of a quiet revolution that has been taking place in Ireland for the past 10 or 20 years," Varadkar told national broadcaster RTE.

"The people have said that we want a modern constitution for a modern country, that we trust women and that we respect them to make the right decisions and the right choices about their own healthcare."

Varadkar said he wanted a new law allowing abortions to be enacted by the end of the year and Health Minister Simon Harris told AFP that the cabinet would meet on Tuesday to approve the drafting of legislation.

The proposals would see abortion allowed in the first 12 weeks of pregnancy and between 12 and 24 weeks in exceptional circumstances.

The result looks set to be another hammer blow to the Roman Catholic Church's authority in Ireland, coming three years after referendum voters backed legalising same-sex marriage by 62 percent.

Varadkar, Ireland's first gay prime minister, came to power last year in what was seen as another major milestone for diversity in Ireland.

The Church's influence has waned in recent years following a series of child sex abuse scandals.

The referendum comes three months before a visit to Ireland by Pope Francis for the World Meeting of Families.

When the Dublin Central result was declared at the city's count centre, cheers drowned out the returning officer in a party atmosphere.

Ailbhe Smyth, 71, co-director of the Together for Yes campaign, said: "It feels like a great victory, it's the expression of social change... that we could not have dreamed of two years ago.

"We have made a definitive break with the past, which was really very tough on women."

An exit poll for The Irish Times newspaper suggested women voted by 70 percent in favour of the proposal and men by 65 percent.

People over 65 voted 60 percent against repealing the ban. However, all other age groups backed the proposal, with support at 87 percent among the youngest voters, aged 18 to 24.

David Farrell, head of the School of Politics at University College Dublin, said the analysis showed Ireland "bucking international trends: young citizens can be mobilised to vote just like anyone else".

In Dublin, many voters welcomed the expected overwhelming result.

Catherine Claffey, 53, a flower seller on the capital's main Grafton Street shopping thoroughfare, said: "We've pulled ourselves out of the dark ages. We're not a backward country any more, the way the church would have had us thinking."

"It just shows how progressive we are."

The Love Both official pro-life campaign said regardless of the result, "the campaign to protect unborn babies will endure".

"Our campaign does not end with the referendum, but when the government properly supports the mother and child," it said.

Abortion is still banned in some 20 countries worldwide, while others have highly restrictive laws in place. In the European Union, predominantly Catholic Malta is the only country with a total ban.

Ireland introduced a constitutional ban on abortion following a 1983 referendum. Anyone terminating a pregnancy in Ireland currently faces up to 14 years in jail.

The law was tweaked in 2013 to allow terminations if the mother's life is at risk.

The ban has led to thousands of women travelling each year to neighbouring Britain, where terminations are legal, or increasingly turning to abortion pills sold online.

Art director Aoife Murray, 27, who voted in Dublin, said the exit poll left her in tears of relief.

"It's mad that there would have been people flying in to vote and a number of women in that airport waiting to leave to go and have an abortion," she told AFP.

Naomi Long, leader of the Alliance Party in neighbouring Northern Ireland, said "eyes will now turn" north of the border, where abortion and same-sex marriage remain illegal, unlike the rest of the United Kingdom.