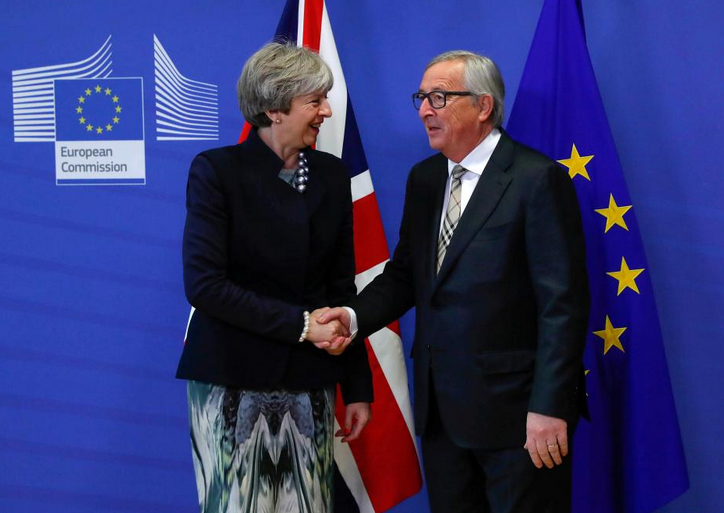 Theresa May failed to clinch a deal on Monday to open talks on post-Brexit free trade with the European Union after a tentative deal with Dublin to keep EU rules in Northern Ireland angered her allies in Belfast.

The British prime minister had sat down to lunch with European Commission President Jean-Claude Juncker hoping that a last-minute offer to the Irish government of “regulatory alignment” on both sides of a new UK-EU land border would remove a last obstacle to the EU open talks next week on future trade.

Yet as May and Juncker spoke in Brussels and the pound rose on prospects of free trade and perhaps even a very “soft Brexit” for Britain as a whole, Northern Ireland’s Democratic Unionist Party (DUP) issued an uncompromising reiteration of its refusal to accept any “divergence” from rules on the British mainland.

Irish Prime Minister Leo Varadkar canceled a news conference and the pound fell back, losing a cent against the dollar, as May and Juncker emerged to declare that there was still no “sufficient progress” on divorce terms to move ahead.

Varadkar later said he was surprised and disappointed with May’s U-turn after the British government had agreed a text with the EU on Monday that would avoid any hard border which might upset peace in the north after decades of violence.

He added that he was happy to give London more time but also noted that the DUP, while the biggest party in the north, did not have a majority in a province that voted against Brexit. He said he was open to changing the wording of Monday’s agreed text, but only if its meaning remained the same.

The Irish border has emerged as a defining issue for Brexit. Hardliners in May’s government want to ensure Britain is not bound by EU regulations after it leaves the bloc, but that has proven difficult to reconcile with the 1998 Good Friday peace agreement, which promises an unguarded border between British-ruled Northern Ireland and the Irish Republic.

May and Juncker said they were confident remaining issues could be resolved this week so that the other 27 EU leaders would approve opening trade talks at a Dec. 15 summit. Juncker, aware that a raft of concessions to EU demands risks weakening May further at home, hailed May as a “tough negotiator”.

May said: “We will reconvene before the end of the week and I am also confident that we will conclude this positively.”

But the Irish border issue has exposed fundamental dilemmas in May’s Brexit plans, and also underlined how a botched snap election in June has weakened her hand in Europe and at home by leaving her dependent for a majority on the DUP’s votes.

The initial proposal described earlier on Monday by Irish officials would have ensured that regulations in Northern Ireland remained “aligned” with those in the EU, so that people and goods could cross the border with no checks.

Juncker insisted the meeting was “not a failure”. He added: “Despite our best efforts and the significant progress we and our teams have made over the past days on the remaining issues, it was not possible to reach a complete agreement.”

Earlier, an Irish government source said of the accord: “The key phrase is a clear commitment to maintaining regulatory alignment in relation to the rules of the customs union and internal market which are required to support the Good Friday Agreement, the all-island economy and the border.”